Skip to content
Home H Military Why the RAH-66 Comanche Was Doomed From Takeoff
Posted By stdaily
Posted On October 31, 2022

Why the RAH-66 Comanche Was Doomed From Takeoff


Among Defense Department insiders, the RAH-66 Comanche program is still seen in a fairly positive light.

Here’s What You Need to Remember: After decades of development and nearly $7 billion spent on the Comanche program, it came to a close with just two operational prototypes ever reaching the sky.

The U.S. has long led the world in stealth technologies, and for a time, it looked as though America’s love for all things low-observable would extend all the way into rotorcraft like the RAH-66 Comanche Helicopter.

Despite being only a decade away from ruin, the Soviet Union remained a palpable threat to the security and interests of the United States at the beginning of the 1980s. However, elements of America’s defense apparatus were beginning to look a bit long in the tooth after decades of posturing, deterrence, and the occasional proxy wᴀʀ.

With the Soviet Union was believed to still be funneling a great deal of money into their own advanced military projects, the U.S. Army set to work on finding a viable replacement for their fleets of Vietnam-era light attack and reconnaissance helicopters in its forward-looking Light Helicopter Experimental (LHX) program. The program’s intended aim was fairly simple despite the complexity of the effort: To field a single rotorcraft that could replace the UH-1, AH-1, OH-6, and OH-58 helicopters currently parked in Army hangars.

By the end of the decade, the Army announced that two teams, Boeing–Sikorsky and Bell–McDonnell Douglas, had met the requirements for their proposal, and they were given contracts to develop their designs further. In 1991, Boeing–Sikorsky won out over its competition and was awarded $2.8 billion to begin production on six prototype helicopters.

The Need for a Stealth Helicopter

The Boeing–Sikorsky helicopter, dubbed the RAH-66 Comanche, was intended to serve as a reconnaissance and light attack platform. Its mission sets would include flying behind enemy lines in contested airspace to identify targets for more powerful attack helicopters or ground units, but the RAH-66 wouldn’t have to back away from a fight.

In order to meet the Army’s demands, the Comanche would need to be able to engage lightly armored targets as well as identify tougher ones for engagement from more powerful AH-64 Apaches.

Most importantly, the RAH-66 needed to be more survivable than the Army’s existing scout helicopters in highly contested airspace, which meant the new Comanche helicopter would need to borrow design elements from existing fixed-wing stealth platforms like the F-117 Nighthawk to defeat air defense systems and missiles fired from other helicopters.

The Boeing–Sikorsky team quickly set about building the program’s first two prototypes, leveraging the sort of angular radar-reflecting surfaces that gave the Nighthawk its enigmatic visual profile. Those surfaces themselves were made out of radar-absorbing composite materials to further reduce the RAH-66’s radar signature. The stealth helicopter also managed engine exhaust by funneling it through its shrouded tail section, reducing its infrared (or heat) signature to further limit detection.

Its specially designed rotor blades were canted downward to reduce the amount of noise the helicopter made in flight. Finally, a full suite of radar warning systems, electronic warfare systems, and chaff and flare dispensers would help keep the RAH-66’s crew safe while they rode behind Kevlar and graphite armor plating that could withstand direct hits from heavy machine gunfire.

The result of all this technology was a stealth helicopter said to have a radar cross-section that was 250 times smaller than the OH-58 Kiowa helicopter it would replace, along with an infrared signature reduced by a whopping 75%. It wasn’t just tough to spot on radar or hit with heat-seeking missiles either. The Comanche helicopter was also said to produce just half the noise of a traditional helicopter. While the rotorcraft could still be heard as it approached, that reduced signature would mean enemy combatants would have less time to prepare before the Comanche closed in on them. 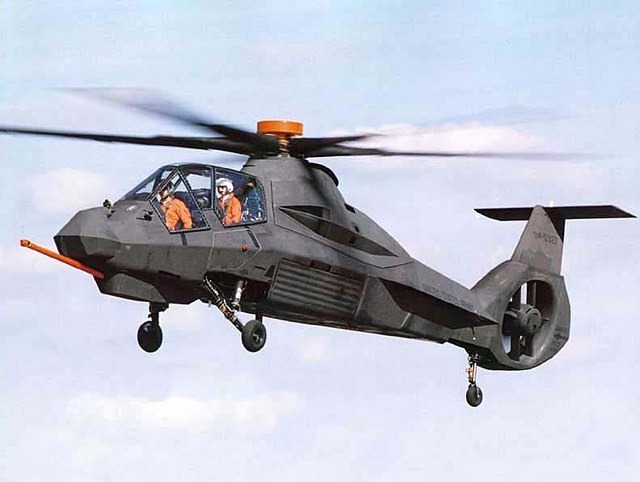 The RAH-66 Was About More Than Stealth

With the Comanche’s stealth technology spoken for, next came the armament. The stealth helicopter was expected to engage both ground and air targets in a combat zone, and its munitions reflected that goal. Like the stealth fighters to come, the Comanche limited its radar cross-section by carrying its weᴀponѕ internally, including a retractable 20-millimeter XM301 Gatling cannon and space inside the weᴀponѕ bays for six Hellfire missiles. If air superiority had been established and stealth was no longer a pressing concern, additional external pylons could carry eight more Hellfires.

However, if the Comanche was sent out to hunt for other attack and reconnaissance helicopters behind enemy lines, it could wreak havoc with 12 AIM-92 Stinger air-to-air missiles. Again, with air superiority established, an additional 16 Stinger missiles could be mounted on external pylons.

The pilot and weᴀponѕ officer onboard would have utilized a combination of cockpit displays and helmet-mounted systems similar to the more advanced heads up and augmented reality displays found in today’s advanced stealth aircraft like the F-35 Joint Strike Fighter.

It was equipped with a long-range Forward-Looking Infrared Sensor to help spot targets, as well as an optional Longbow radar that could be mounted above the rotors to allow the pilot to peak just the radar over hills or buildings–giving the crew important situational awareness of the battlefield ahead while limiting exposure of the rotorcraft itself. Once the Comanche spotted a target, a laser could be used to lock on for its onboard weᴀponѕ systems.

The RAH-66 Comanche’s air-to-air credibility was further bolstered by the platform’s speed and agility. With a top speed just shy of 200 miles per hour and enough acrobatic prowess to nearly pull off loop-de-loops, the Comanche was fast, agile, and powerful… but by the time the first two Comanche prototypes were flying, it was also widely seen as unnecessary.

A Warrior Without a wᴀʀ

The first Comanche prototype took to the skies in January of 1996, five years after the dissolution of the Soviet Union. The stealth helicopter had been envisioned as a necessary weᴀpon amid the constant defense posturing of the Cold wᴀʀ, but without the looming threat of a technologically capable geopolitical boogeyman, the Comanche began to look more like a pile of problems, rather than solutions.

The Comanche was truly forward-reaching in its capabilities, but as is so often the case with first-of-its-kind platforms, that reach came with a long list of cost overruns and technological setbacks. The helicopter had proven to be far heavier than anticipated; So heavy, in fact, that some wondered if the stealth helicopter would even get off the ground with its intended weᴀponѕ payload. And its weight was just the beginning of the Comanche’s headaches.

Just about every system intended for use aboard the RAH-66 met with setback after setback. Bugs in the software meant to manage the helicopter’s operation proved difficult–and expensive–to root out, the 3-barrel cannon wasn’t as accurate as intended, the target detection system failed to meet expectations, and efforts to both reduce weight and pull more power of the Comanche’s intended T800 turboshaft engines were both slow going.

Each of these issues could have been resolved with enough time and money, but the U.S. Army was already getting tired of waiting for the Comanche to live up to its hype. Then, September 11, 2001 shifted America’s defense priorities for decades to come. A year after the terror attack that would prompt a shift toward anti-terror campaigns, the Army reduced their order for Comanches by almost half, and just two years later, the program itself was canceled.

After decades of development and nearly $7 billion spent on the Comanche program, it came to a close with just two operational prototypes ever reaching the sky. 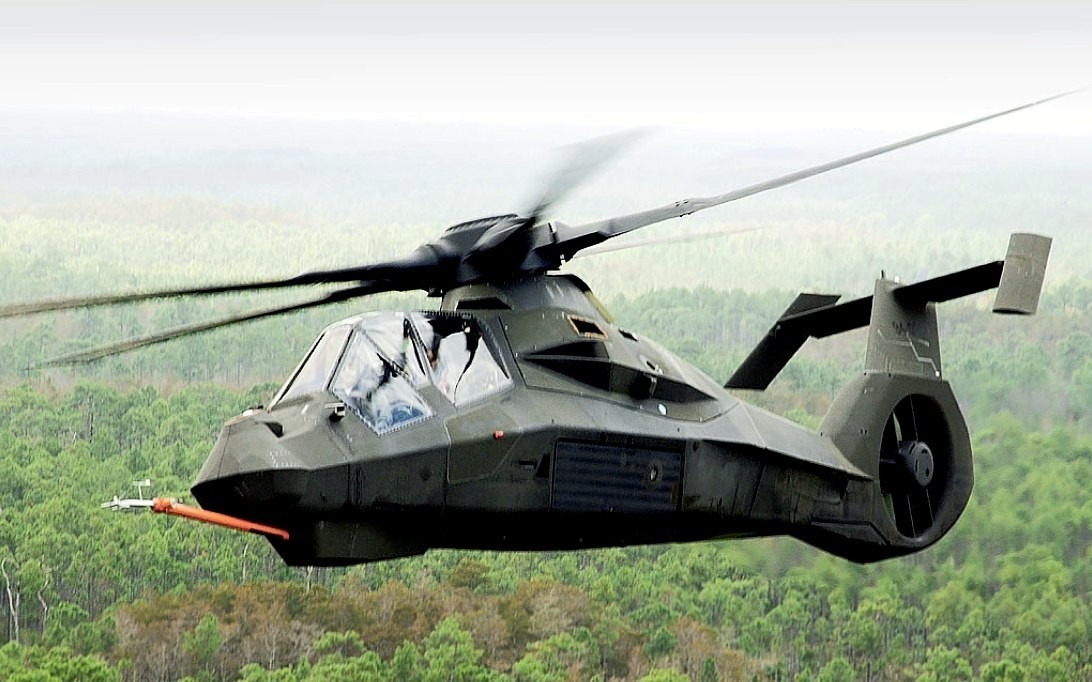 The Comanche’s Life After Death

While originally slated for a production run of 1,213 RAH-66 Comanche helicopters, the U.S. Army only ever took possession of the original two prototypes… but that doesn’t mean the program was a complete loss. In fact, among Defense Department insiders, the RAH-66 Comanche program is still seen in a fairly positive light. The difference in perception of the Comanche’s success or lack thereof could potentially be attributed to elements of other classified programs the American public isn’t privy to.

In 2011, Deputy Undersecretary of the Army Thomas Hawley was asked a question by a journalist about the “failed Comanche program.” “I wouldn’t say Comanche was necessarily a failure of procurement,” he replied. “Comanche was a good program.”

A similar sentiment was also registered by (now former) Army Chief of Staff General Peter Schoomaker: “Much of what we’ve gained out of Comanche we can push forward into the tech base for future joint rotor-craft kinds of capabilities.”

These assertions make some sense, but are also easily dismissed thanks to the noticeable lack of stealth rotorcraft in America’s arsenal. How could lessons from the Comanche really be used if the premise itself doesn’t carry over into further programs?

One high-profile possibility came in the form of images that emerged following the raid on Osama Bid Laden’s compound that resulted in the death of the terrorist leader… As well as the loss of one highly specialized Blackhawk helicopter. Immediately following the announcement of Bin Laden’s death, images began to surface online of a very unusual tail section that remained intact after American special operators destroyed the downed helicopter to ensure its technology couldn’t fall into enemy hands.

The tail is clearly not the same as the tail sections of most Blackhawk helicopters, and its angular design certainly suggests that it must have come from a helicopter that was intended to limit its radar return. Eventually, stories about America’s Special Operations Stealth Blackhawks, or Stealth Hawks, started making the rounds on the internet, and recently, the team over at The Warzone even managed to dig up a shot of just such a stealthy Blackhawk–likely a predecessor to the helicopters used in the historic raid.

While these modified stealth helicopters are not Comanches, the modifications these Blackhawks saw were almost certainly informed by lessons learned in the RAH-66 program. Reports from the scene of the raid also indicate how quiet the helicopters were as the American special operations team closed with their target. Clearly, efforts made to reduce the helicopters’ radar cross section, infrared signature, and noise level were all in play during the Bin Laden raid, just as they were within the Comanche prototypes.

And then there’s Sikorsky’s latest light tactical helicopter, the S-97 Raider. Its visual cues are certainly reminiscent of the company’s efforts in developing the RAH-66, and its performance is too. The S-97 Raider has been clocked at speeds in excess of 250 miles per hour–faster even than the proposed Comanche’s top speed–and like the Comanche, the Raider is nimble to boot.

The RAH-66 Comanche stealth helicopter may have been a bit too forward reaching for its time, but the lessons learned throughout its development and testing have clearly found new life in other advanced programs. With defense officials increasingly touting the value of stealth to increase combat aircraft survivability, it seems certain that we’ll see another stealth helicopter enter service at some point. And when we do, it will almost certainly have benefitted from the failures and successes of the Comanche.