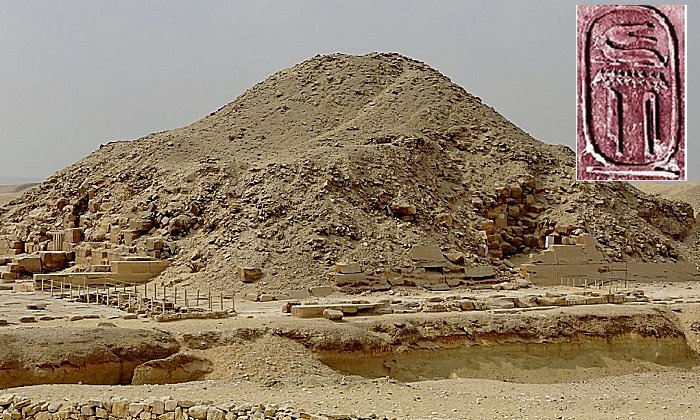 The pyramid of Unas at Saqqara. Credit image – Olaf Tausch – CC BY 3.0

His main claim for fame and reputation is known today thanks to his pyramid, where for the first time in Egyptian history, the burial chamber’s walls were decorated with the Pyramid Texts.

Not much is known about Unas, his family, and the kingdom. However, ancient sources suggest that there may have been a period of social instability after his death.

And yet, Unas, the last king of the 5th Dynasty, is probably one of the most mysterious rulers in the history of ancient Egypt because of the inscriptions found in his pyramid that constitute the oldest and most extensive religious document.

Unas (preceded by Djedkare, probably his father) was the ninth and last ruler of the Fifth Dynasty (2494-2345 BC) of the Ancient Kingdom. His daughter married Teti, who would succeed him as king, and who was announced the founder of the 6th Dynasty. However, some scholars do not agree and suggest that the real founder of the Dynasty was Unas himself. 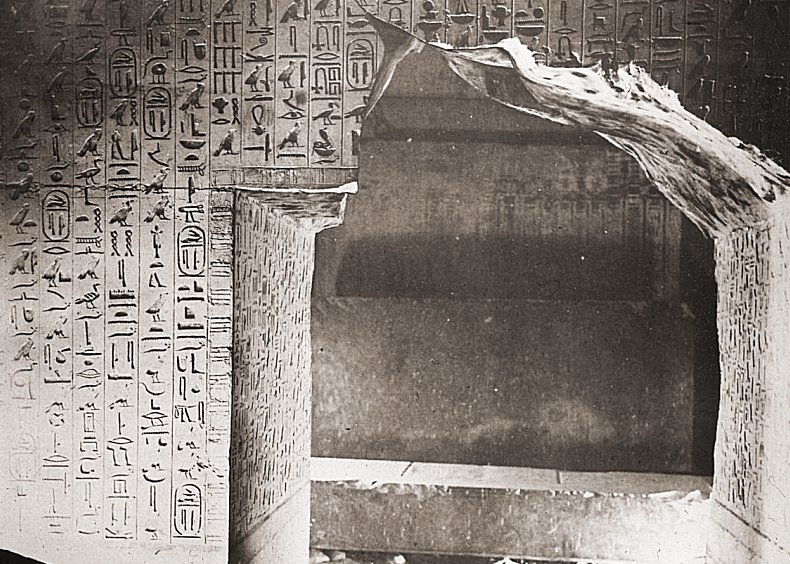 Based on the burials near his tomb, king Unas had two consorts Nebet and Khenut, and eight children (Unas-ankh, Iput, Hemetre, Khentkaues, Neferut, Nefertkaues, Sesheshet, and  Idut). He probably had a son, who died about ten years into Unas’ reign.

According to Manetho, an Egyptian high priest who lived during the 3rd century BC, Unas probably had no sons and died without a male heir. This problem was resolved when Unas’ daughter Iput became queen/wife by marriage to Teti, who could take power in the country as the first ruler of the 6th Dynasty.

The name “Unas” is the 32nd name on the list of Saqqara, and he reigned for probably thirty or thirty-three years, which means almost 4,500 years ago (!). Unas’ reign is dated to a period of the country’s economic decline. At the same time, it was a difficult time for Unas, the ruler without an heir, which led to a short period of political instability.

Pyramid With Interesting and Unusual Interior

Unas’s reign is poorly documented, and his temple was found in ruins. The structure –  located not far from the complex of Djoser (2667-2648 BC) in north Saqqara – was only 18.9 m (62ft) in height when it was complete and to its surrounding buildings were used limestone blocks transported from the Step Pyramid. 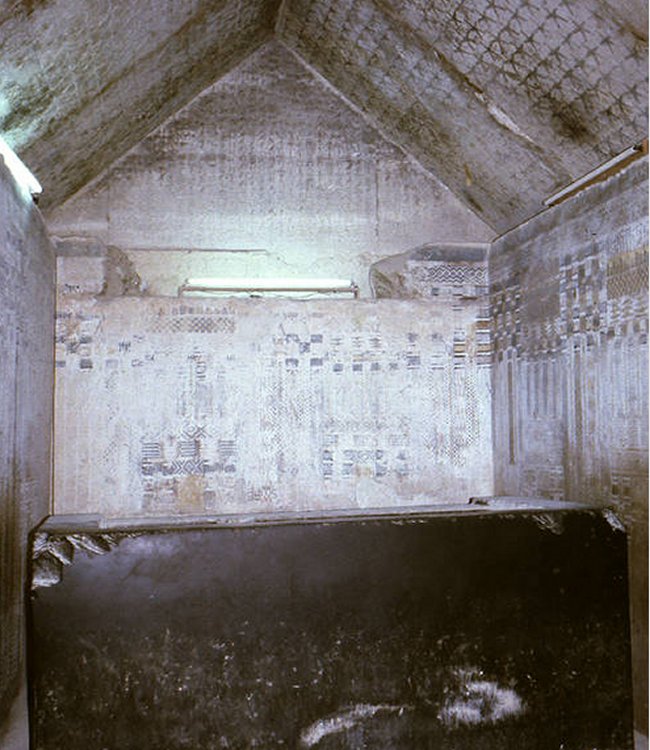 However, there is still much to see in the remains of the Unas pyramid. There is a long causeway leading to the east face of the mortuary temple and the north entrance to the pyramid itself.

The pyramid was first entered in modern times by Sir Gaston Maspero (1846 – 1916), a French Egyptologist, in 1881, where he discovered long columns of hieroglyphic texts covering the walls of the pyramid’s interior. It is known that the tomb of Unas was sealed ca. 2348 BC, so the texts remained unaltered for more than 4200 years. Maspero had an opportunity to witness the earliest ‘Pyramid Texts’ found inside the temple.

The pyramid of Unas contains only 283 of the more than 700 known spells of the Pyramid Texts.

The texts include 228 spells to help the deceased’s soul journey to the next world. Other specific spells were probably recited during the burial ceremony. Maspero also found different formulae meant to protect the dead in the afterlife.

In the texts, Unas is identified with the gods Ra and Osiris. The purpose of the texts was to help the deceased king in the afterlife, mainly because in Unas’ time, these two gods strongly influenced ancient Egyptian beliefs. 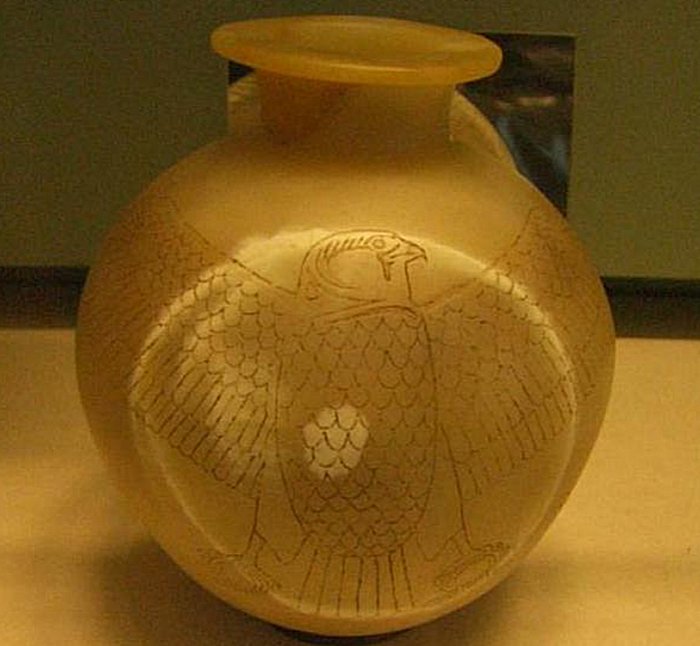 Innovations of the Pyramid Texts found in the pyramid’s interior and pyramid bas reliefs on its inner walls attest to a high quality dated to the Old Kingdom.

“The walls were covered with carved reliefs more reminiscent of the mastaba tombs of the nobles, showing markets and bargaining in progress, ships in full sail, hunting in the desert, small vignettes of desert life, and, most interestingly, scenes of famine which presumably occurred during the reign. On the south side of the causeway are two huge stone-lined boat pits, but whether they actually held wooden boats like that of Khufu or were just symbolic is debatable.” 1

“On the outer casing of the south side of Unas’ pyramid is an inscription recording the restoration of the pyramid, which had fallen into decay, and the restitution of the king’s name. This was done in the 19th Dynasty by Khaemwaset, High Priest of Memphis and one of the many sons of Ramesses II who predeceased him: he might be described as the first conservation archaeologist. Found scattered on the desert face, the inscription was restored and replaced high up on the pyramid in the late 1940s.” 1

Unas’ pyramid was the first to feature such texts, but what king Unas introduced became the long-lasting tradition accepted by the future ruler in the subsequent Dynasty. 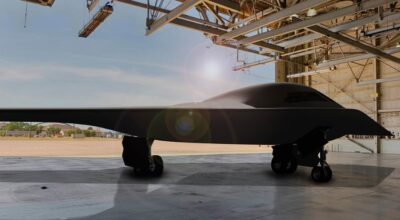 Previous post Counting the Days, US Will Unveil Its First B-21 Raider Bomber After 30 Years 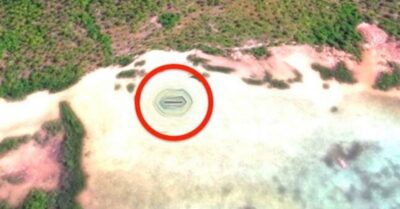