Ellen Lloyd – Icestech.info – The Biblical story of the Tower of Babel in Genesis explains why people speak different languages. The Choctaw, a Native American Indian tribe that traditionally lived in what is now southeastern Mississippi, also talk about what happened with the Tower of Babel. 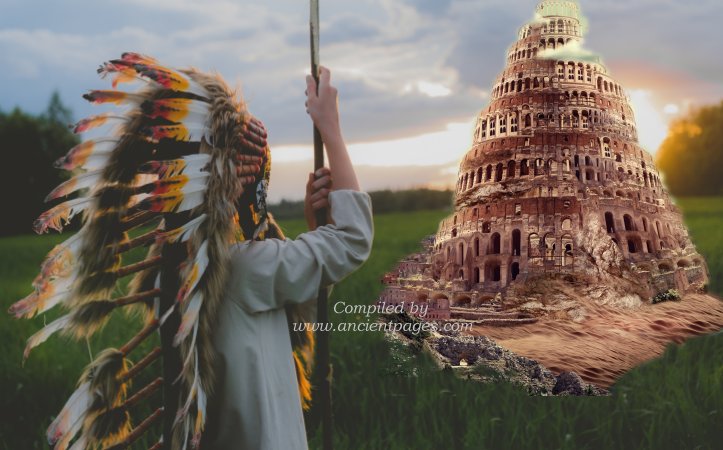 The Cherokee also remember days when flooding threatened their homes, and they built a massive tower. Their stories are slightly different, but there are many similarities with the Biblical account.

According to the Bible, once, a very long time ago, people all over Earth were united and shared a single language.

The Tower Of Babel As Told In The Bible

According to Biblical scholars, the Tower of Babel is a unique story of the interplay between God and humanity and the terrible results of rebellion. In the well-known Biblical story, we are told that for a brief time after the Great Flood, “the whole Earth was one of language, and of one speech” (Genesis, 11:1).

This ancient, unified people created an impressive city and began building a tower, which they hoped would someday rise to heaven.

Determined, however, to prevent Adam and Eve’s descendants from achieving this goal, “the Lord did there confound the language of all the Earth: and from thence did the Lord scatter them abroad upon the face of all the Earth” (Genesis, 11:9) 1 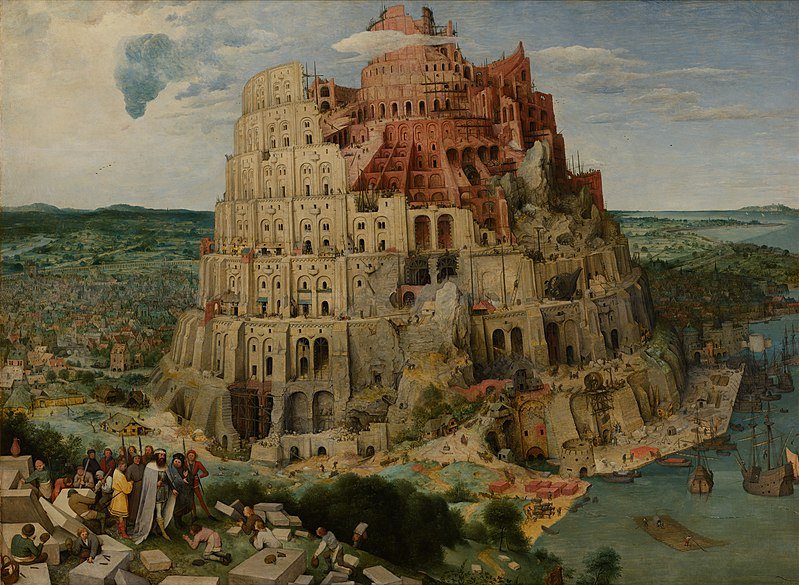 The Tower of Babel by Pieter Bruegel the Elder (1563). Credit: Public Domain

The human rebellion against God resulted in the Lord’s punishment and dispersal. People became confused and could no longer understand each other. They scattered around the world, and new languages emerged, but their common language was gone forever.

In the Bible, the Tower of Babel is referred to as the city and the tower. For this reason, many scholars have suggested the Tower of Babel was as a ziggurat. “The Sumerian tradition of building ziggurats was adopted by other Mesopotamia civilizations such as the Akkadians, the Babylonians, and the Assyrians.

The ziggurat, according to the Sumerians, was a cosmic axis. As Mircea Eliade (1907-1986), a Romanian historian of religion, philosopher, and professor at the University of Chicago, maintained, the Sumerians tried to live in the presence of the sacred because they “desired access to the ultimate reality and the power of the sacred.” 2

“Depending on the date of the writing of Genesis, the compiler may have been pointing to a future construction common to the day or looking back to the glory days of presently defunct empires.

Archaeological Evidence Of The Tower Of Babel?

Most of the ziggurats found today are three to seven steps tall. If these later ziggurats were modeled after the Tower of Babel, then this may provide some picture as to the nature of the original tower, but one cannot be resolute on this point.” 3

Archaeologists have long tried to find the remains of this ancient structure but never succeeded. Some years ago, researchers announced they “have deciphered an ancient tablet believed to depict the Biblical Tower of Babel that stood in Babylon during Biblical times. Researchers translated the inscription, which identifies the structure as the “Tower of Temple of Babylon”. 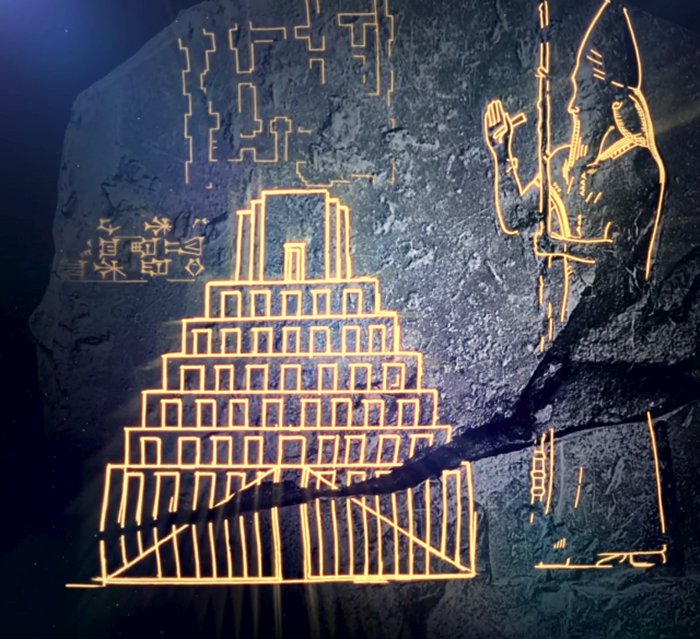 The inscription confirms the building was a Mesopotamian-style tower and illustrates the seven tiers of the ancient megastructure. It also identifies the man behind it, depicted next to the tower –  King Nebuchadnezzar II,  ruler of Babylon c. 605 BC – c. 562 BC, who had the longest reign of any king of the Neo-Babylonian empire.

A detailed account on the tablet reads as follows:

The Cherokee Have Also A Story Of The Tower Of Babel

The Cherokee also mentioned a time when a great flood was threatening their lands and decided to construct a huge tower reaching the heavens. “When we lived beyond the great waters there were twelve clans belonging to the Cherokee tribe. And back in the old country in which we lived the country was subject to great floods. So in the course of time we held a council and decided to build a storehouse reaching to heaven.

The Cherokees said that when the house was built and the floods came the tribe would just leave the earth and go to heaven. And we commenced to build a great structure, and when it was towering into one of the highest heavens the great powers destroyed the apex, cutting it down to about half of its height.

But as the tribe was fully determined to build to heaven for safety they were not discouraged but commenced to repair the damage done by the gods. Finally, they completed the lofty structure and considered themselves safe from the floods. But after it was completed the gods destroyed the high part, again, and when they determined to repair the damage they found that the language of the tribe was confused or destroyed.” 5

The Choctaw Indians’ Memories Of The Tower Of Babel

The Choctaw have a story of the Tower of Babel. “Their creator-god, Aba, originally made all people to speak the same language, but they became curious and started to build a pile of rocks to reach the sky.

Each night the wind blew the rocks down, separating the people into different groups, until on the fourth day the people found they were unable to understand each other. They scattered to form the many North American tribes, each of which spoke a different language, and were thereafter in conflict with one another.” 5 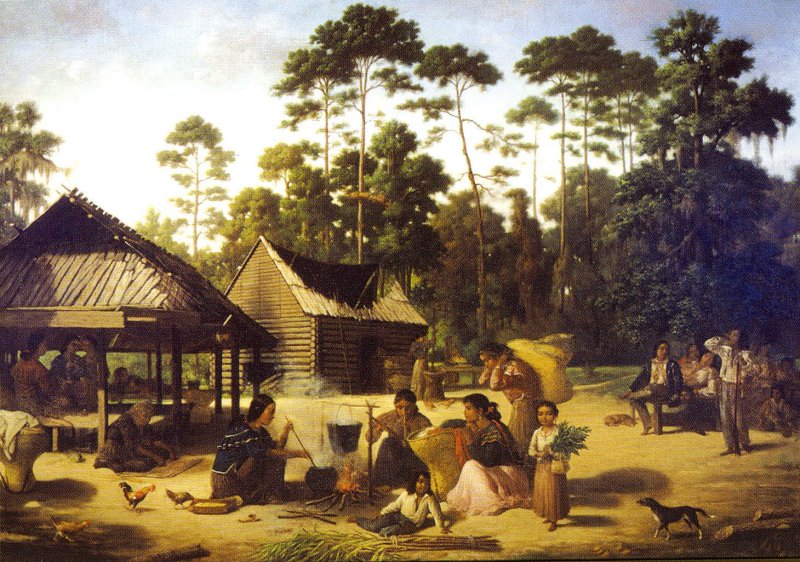 How did Native American tribes come up with a story that is almost identical to the account found in Genesis? One possibility is naturally they learned about the Towe of Babel from early Europeans who attempted to convert the natives to Christianity. The expansion of European influence in America could have shaped some Native American myths, like the Tower of Babel story.

However, let us not forget that accounts of the Tower of Babel have been found among people in Africa and Asia. Maybe they also heard the story from early Christians. But the notion there may once have been a single language spoke by all people of the Earth remains intriguing. Perhaps once in the distant past, our planet was home to a Universal civilization that shared the same language. We may never know the truth.