22 May 1991: After nearly 30 years in service with West Germany, the Lockheed F-104 Starfighter made its last flight before retirement. The Luftwaffe was the largest single operator of the Lockheed F-104 with nearly 35% of the total worldwide production in West German service. 915 F-104F two-place trainers and F-104G fighter-bombers were built, with most going to the Luftwaffe, but 151 were assigned to the West German Navy.

Designed by the legendary Kelly Johnson as a Mach 2 interceptor, the Starfighter was used as a fighter bomber by Germany. The F-104G was most-produced version of the Lockheed Starfighter. It had a strengthened fuselage and wings, with hardpoints for carrying bombs, missiles and additional fuel tanks. Built by Lockheed, they were also licensed for production by Canadair, Dornier, Fiat, Fokker, Messerschmitt and SABCA.

The Starfighter’s standard armament consists of a 20 mm General Electric M61A1 Vulcan 6-barreled Gatling gun, with 750 rounds of ammunition, and up to four AIM-9 Sidewinder air-to-air heat seeking missiles could be carried on the wingtips or under wing pylons. In place of missiles two wingtip fuel tanks and another two underwing tanks could be carried. 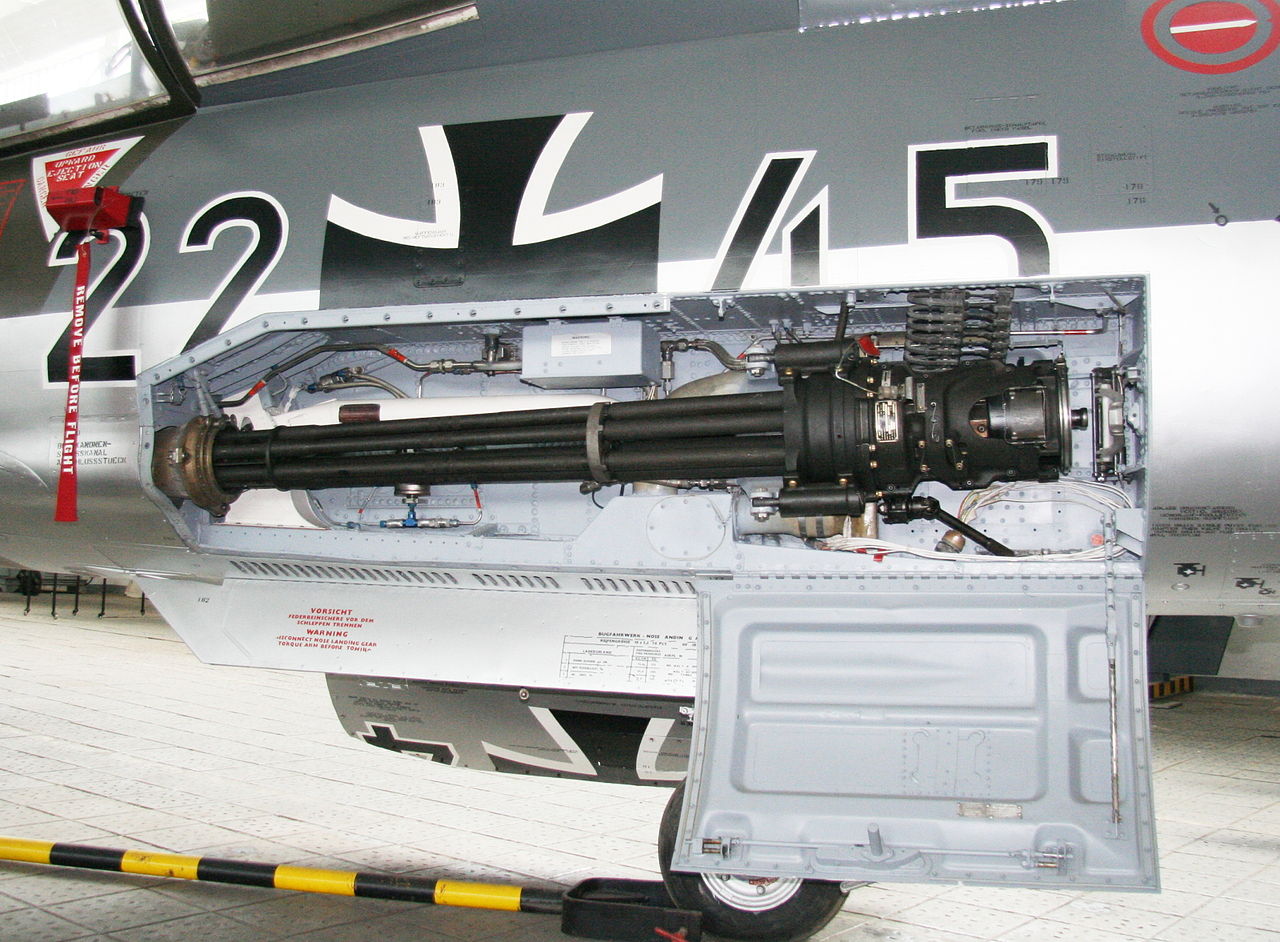 General Electric M61A1 20 mm rotary cannon in the weapons bay of a Messerschmitt-built F-104G Starfighter. (Michael Wolf/Wikipedia)
On NATO alert, the F-104G was armed with a B43 variable-yield nuclear bomb on the fuselage centerline hardpoint. The B43 could be set for explosive force between 170 kilotons and 1 megaton and was designed for high-speed, low-altitude, laydown delivery.

The Starfighter had an undesirable reputation for high accident rates. 270 German F-104s were lost in accidents, resulting in the deaths of at least 110 pilots. In reality, this was not unusual, and can be attributed the the nature of the mission: high-speed, low-altitude flight, in the poor weather conditions of Europe. The German press, however, gave it the name Witwenmacher (“Widowmaker”).

Two F-104G Starfighters in service with the Luftwaffe. The airplane closest to the camera, marked 26+41, was built by Messerschmitt with final assembly by MBB-Manching in February 1971. It is powered by a MAN Turbo J79-MTU-J1K engine rated at 15,950 pounds of thrust. (© Peter Doll)