When wildlife photographer Brent Cizek bought a small plastic boat last winter, he was hoping to ply the lakes of northern Minnesota and capture the most intimate scenes of animals in their natural environment.

But it wasn’t until June that he truly tested the little boat on one of the state’s bigger bodies of water, Lake Bemidji. 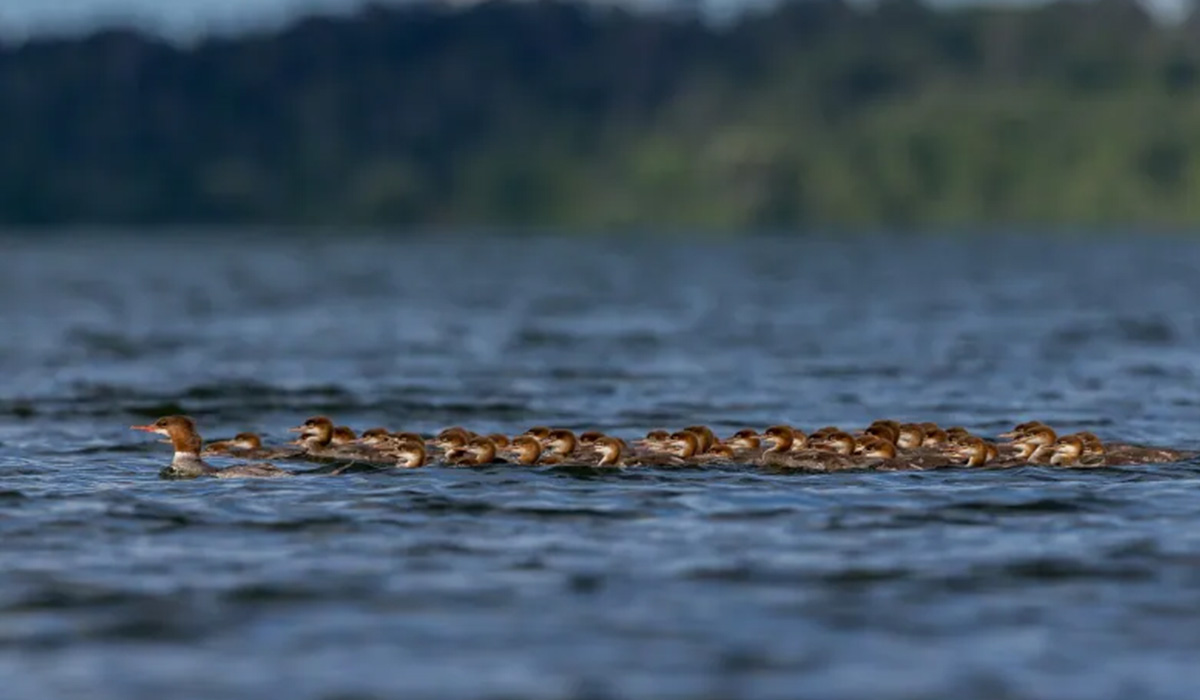 “Well, it wasn’t the greatest idea as it was quite windy that day and the waves were tossing my boat around in any direction that it wanted to,” Cizek tells Treehugger. “I decided to carry on, knowing that it wasn’t likely that I would see anything, much less be able to take a photograph with the choppy water.” 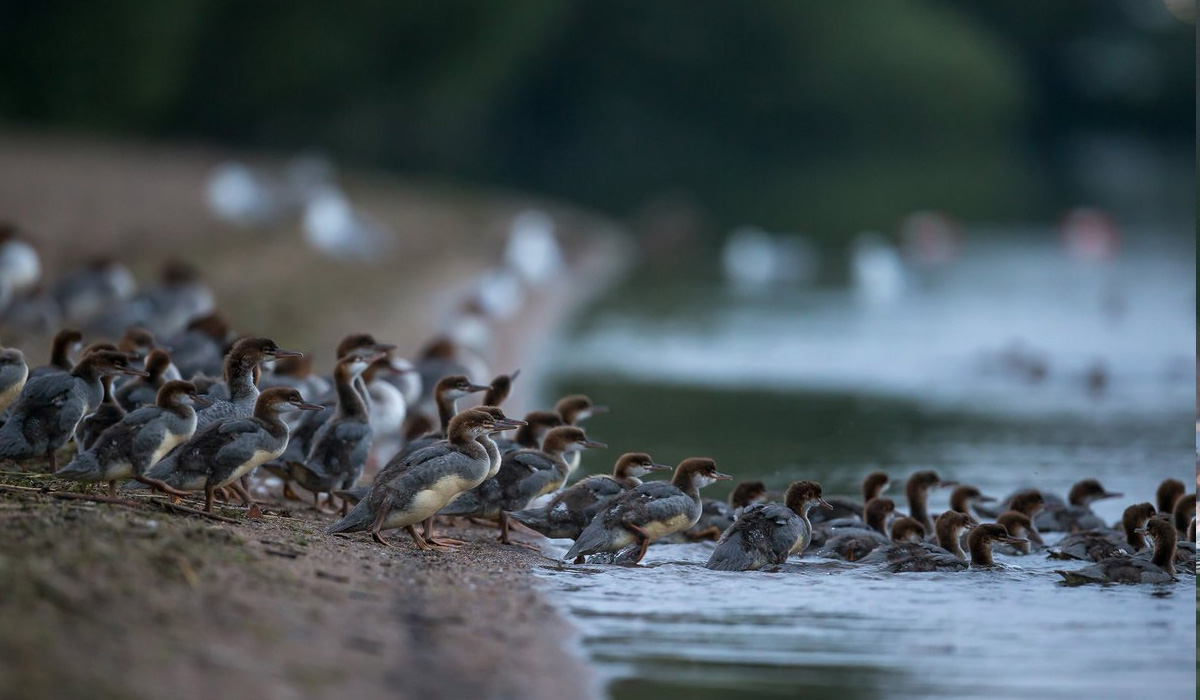 He managed to steer his boat along the shoreline. Then he spotted what seemed to be a gathering of birds. As Cizek edged nearer, he could make out a mother duck — common merganser — and trailing her were ducklings. One… two… three…

“The closer that I got, the more my heart started racing as I had never witnessed something like this before,” Cizek recalls.

The brood had swum under a boat dock. When they emerged, Cizek counted more ducklings. 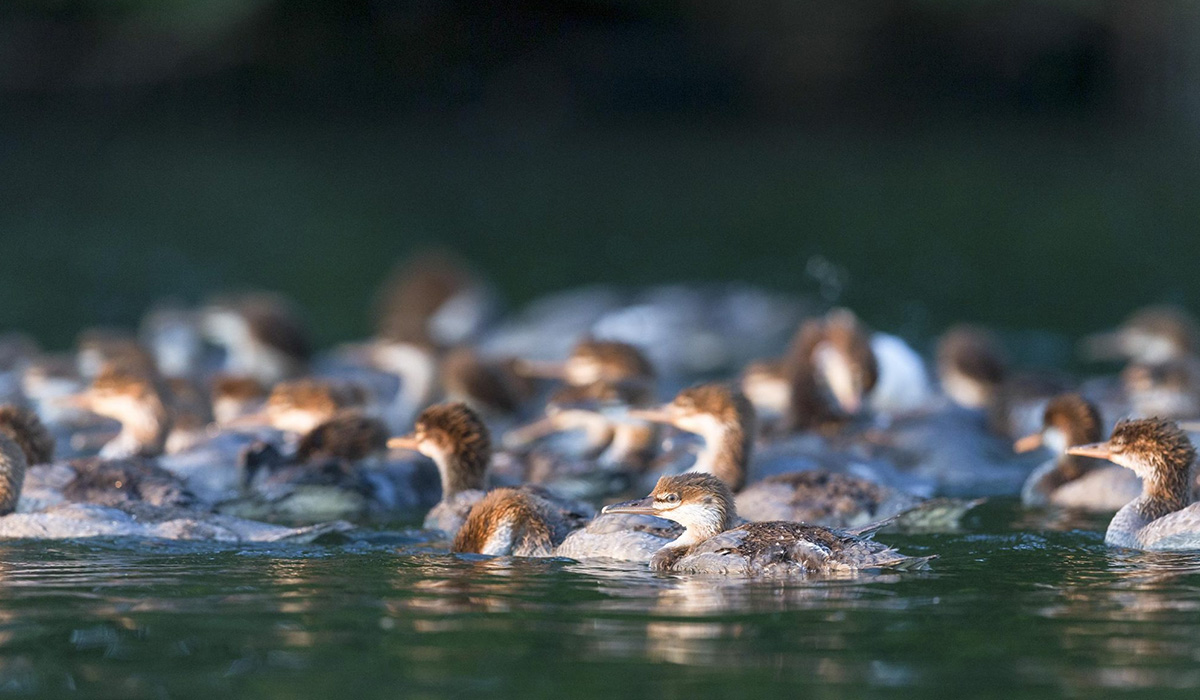 His boat was still getting tossed around on the choppy waters of Lake Bemidji, and the family kept disappearing under docks.

Cizek eventually decided to bring his boat back to the launch. Maybe he’d see that gathering of mergansers again. And he did. On the very beach where he was heading. 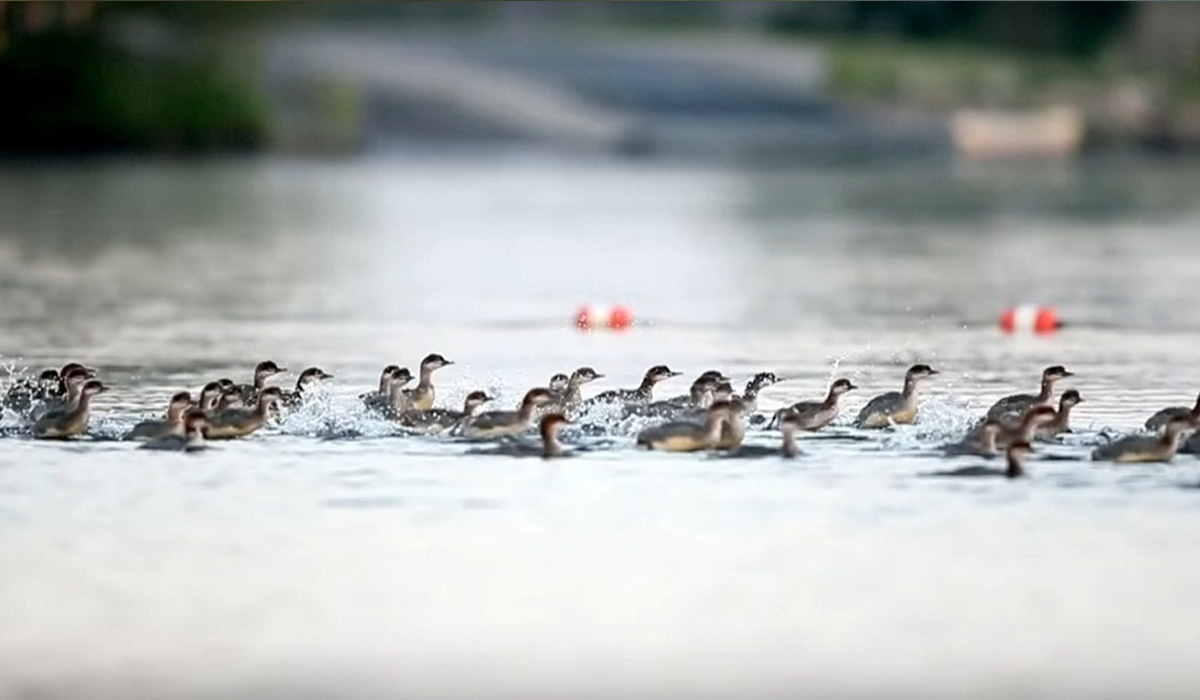 “As I got closer, the group decided to start swimming back out into the lake, and ‘Mama Merganser’ got out front and all of the chicks got in tow.”

“I knew that this was going to be a once-in-a-lifetime photo opportunity, so I immediately tried to fire off as many shots as I could, just hoping that one of the photos would turn out.” 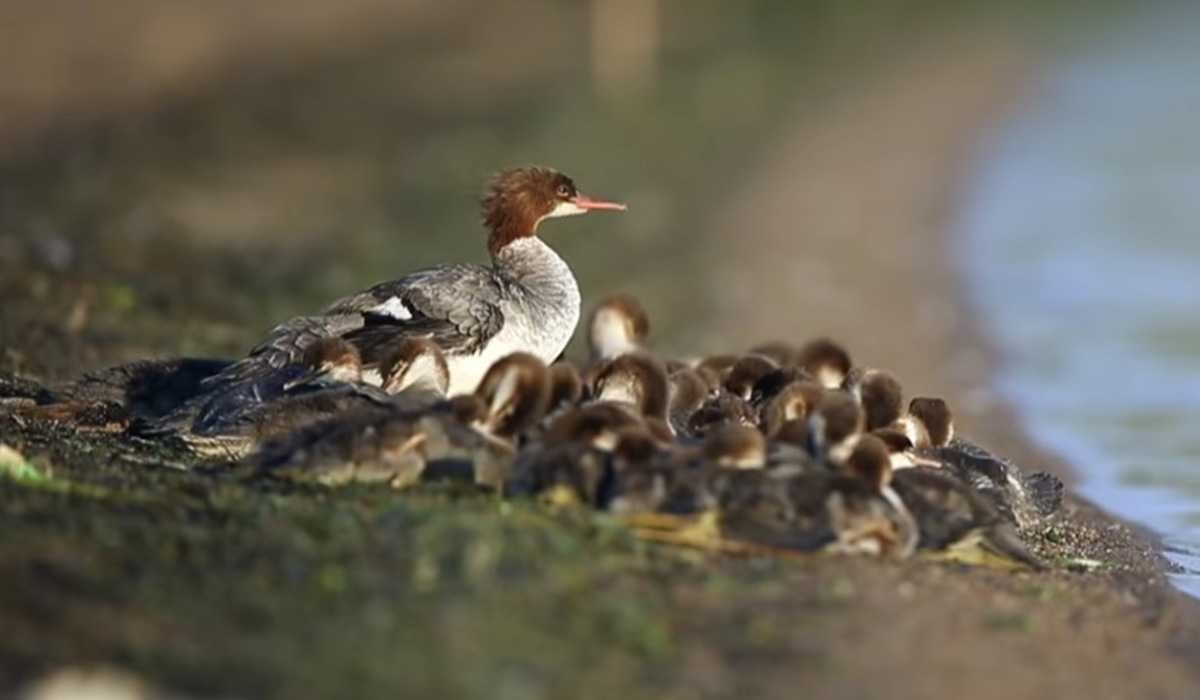 Duckling Day Care
Mama Merganser was being followed by a staggering 56 ducklings. (However, it’s worth noting that this brood is very likely a mixed family, not a single brood. In fact, one Minnesota ornithologist humorously called it a “day-care thing,” with one bird taking the lead for many fledglings, no matter how they all came together.)

Meanwhile, a breathless Cizek finally raced home to see if he had any good pictures. 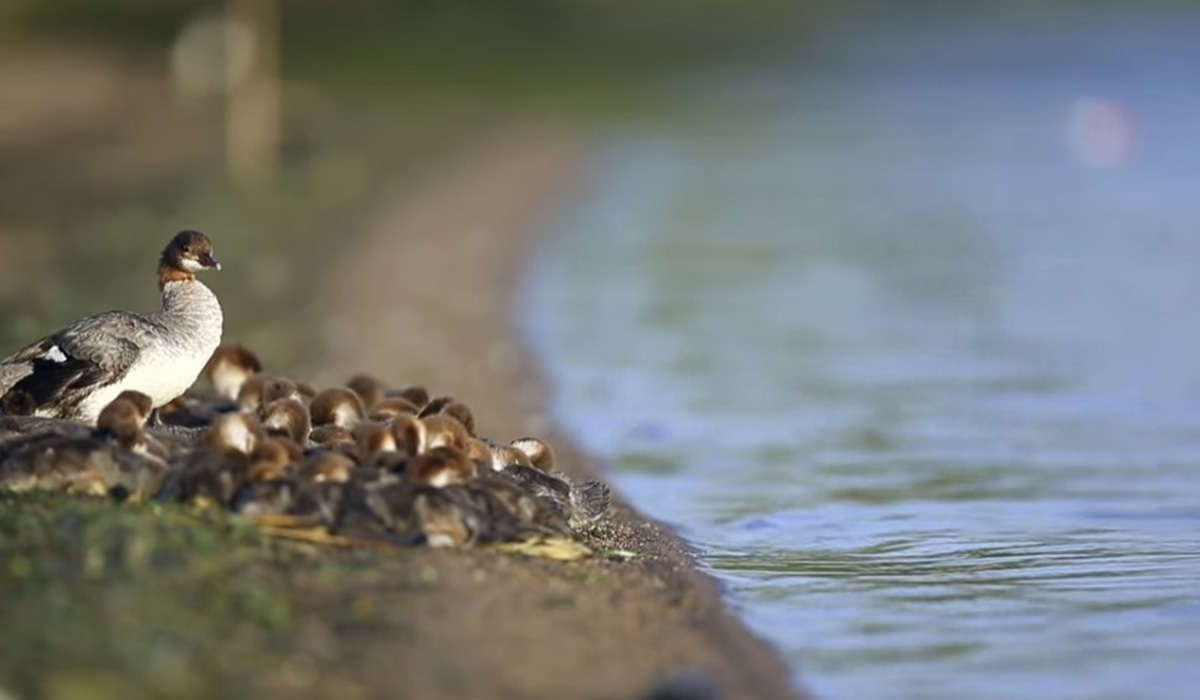 “I found one image that was in focus and that I just loved,” says. “I knew that it would do good on social media, so I posted the photo right away.”

It didn’t take long for that intimate portrait of Mama Merganser and her extraordinary group to take off from that Minnesota lake and shoot across the world.
And while 50 ducklings are definitely on the high end, it’s not unheard of. Still, there’s a limit to the number of eggs one mama duck can adequately incubate. A female duck usually lays around a dozen eggs, but can successfully incubate up to about 20 eggs.

It’s more likely that the mother duck in Cizek’s photos has become an adoptive parent to a large number of babies who somehow got lost or separated from their real moms and instinctively imprinted onto this generous lady. 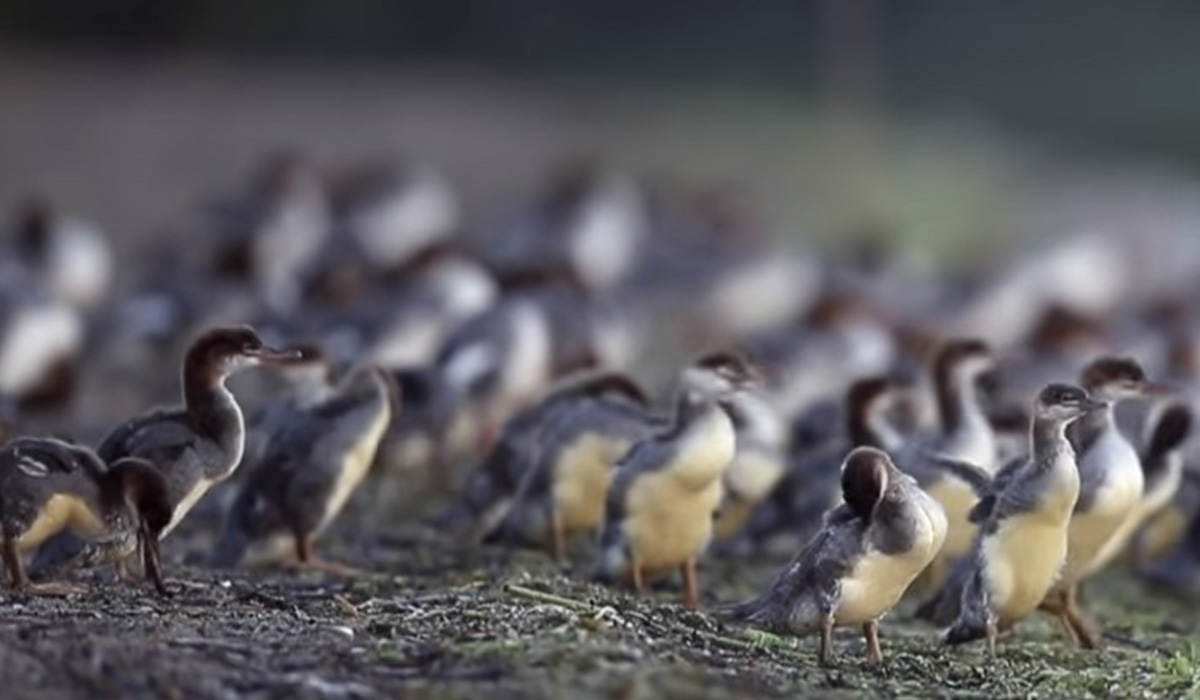 Over the last month, Cizek has been getting calls worldwide from newspapers and even Jimmy Fallon. But most importantly for Cizek, the image — and the story behind it — was featured on the National Audubon Society’s website.

Cizek, an ardent wildlife lover, is a strong supporter of the organization’s mission to protect birds and their natural environments.

He’s hoping his “once-in-a-lifetime” image will inspire people to stand up for animals like Mama Merganser and her many ducklings. And make a donation to the So Audubon society.

More Ducklings
Since his lucky encounter on July 16, Cizek has continued to track the growing family, which currently boasts a 75-plus headcount. PEOPLE reached out to Cizek, an inventory specialist for an e-commerce company and wildlife photographer on the side, to learn more about this unique flock.

On a more recent outing, the line of ducklings seemed even longer.

“I was able to then count 76 babies with her, so she had picked up more babies along the way,” he says. “It’s been remarkable. It’s going to be a sad day when they continue their migration.”