The discovery of a fossil showing an ancient sea creature with 18 tentacles surrounding its mouth has helped to solve a modern-day mystery about the origins of a gelatinous carnivore called a comb jelly, a new study finds.

The previously unknown “sea monster,” which scientists dubbed Daihua sanqiong, lived a whopping 518 million years ago in what is now China. And the extinct animal shares a number of anatomical characteristics with the modern comb jelly, a little sea creature that uses so-called comb rows full of loads of hair-like cilia to swim through the oceans.

The discovery suggests that this newfound species may be the comb jelly’s distant relative, said study lead researcher Jakob Vinther, a paleobiologist at Bristol University in the United Kingdom.

“With fossils, we have been able to find out what the bizarre comb jellies originated from,” Vinther told Live Science. “Even though we now can show they came from a very sensible place, it doesn’t make them any less weird.”

This finding, however, has sparked a debate. While the discovery of D. sanqiong is impressive, it’s hard to say whether this ancient creature is part of the lineage that produced comb jellies, said Casey Dunn, a professor of ecology and evolutionary biology at Yale University, who was not involved with the study.

“I am highly skeptical of the conclusions they draw,” Dunn told Live Science. A magnified shot of the rows of cilia on Daihua sanqiong, which suggest that it might be a distant relative of the modern comb jelly.

Vinther came across the D. sanqiong fossil while visiting colleagues at Yunnan University in China.

The scientists there showed him a number of fossils in their collection, including the mysterious creature they later named Daihua sanqiong, which was discovered by study co-researcher Xianguang Hou, a paleobiologist at Yunnan University. The genus name honors the Dai tribe in Yunnan; “hua” means flower in Mandarin, and refers to the critter’s flower-like shape.

On each of D. sanqiong’s tentacles are fine, feather-like branches with rows of large ciliary hairs, which likely helped it catch prey. These hairs, according to Vinther, grabbed his attention “because we only find big cilia on comb jellies.” To swim, comb jellies move their cilia, which then flicker in beautiful iridescent colors. A living comb jelly, known as Euplokamis. The creature’s rainbow iridescence is caused by the movement of the ciliary comb bands on the animal’s body.

Moreover, the D. sanqiong fossil bears an intriguing resemblance to other known ancient animals, including Xianguangia, another ancient creature with 18 tentacles, and the tulip-like sea creatures Dinomischus and Siphusauctum.

“To make a long story short, we were able to reconstruct the whole [early] lineage of comb jellies,” by doing anatomical comparisons, Vinther said.

This is a big deal, because some scientists argue that these swimming carnivores were among the first animals to evolve on Earth, based on family trees analyses and genetic modeling of modern comb jellies. But now, this international team has possibly shown that comb jellies have a long lineage that precedes them, Vinther said.

This newly described lineage suggests that some of the ancestors of comb jellies had skeletons and that their ancient tentacles evolved into the combs with the densely packed cilia seen on comb jellies today.

The discovery also sheds light on where these ancient animals likely sat on the tree of life. For instance, researchers previously thought that Xianguangia was a sea anemone, but it “is actually part of the comb jelly branch,” study co-researcher Peiyun Cong , a professor of paleobiology at Yunnan University, said in a statement.

These findings also make a strong case that comb jellies are related to corals, sea anemones and jellyfish, the researchers said. “Those [ancient] tentacles are the same tentacles that you see on corals and sea anemones,” Vinther said. “We can trace comb jellies to these flower-like animals that lived more than half a billion years ago.”

But not everyone agrees with this analysis. While Dunn commended the researchers for their detailed description of D. sanqiong and its proposed relatives, some of these creatures have such different body shapes that it’s challenging to see how they could be related, he said. It’s possible that the tulip-looking Dinomischus and Siphusayctum creatures are related to each other. But Siphusauctum has ciliary rows on the inside of its body, and the animal purported to come after it, Galeactena, has these rows on the outside of its body.

It’s hard to see how this animal would, in effect, turn inside out as it evolved, Dunn said. Given that some of these claims are tenuous, the burden of proof is higher, and the researchers don’t quite get there, Dunn said.

“These are exciting animals no matter how they’re related to each other,” Dunn said. “Even though I’m skeptical that tentacles and comb rows are homologous [evolutionarily related], I think that as we describe more diversity from these deposits, certainly we’re going to learn a lot more about animal evolution.” 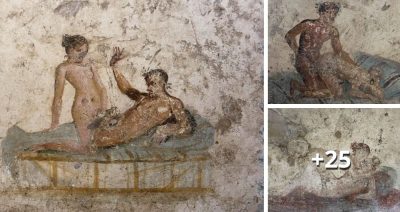