Ellen Lloyd – Icestech.info – The ancient Qijia culture remains a historical and archaeological puzzle. Its mysterious and sudden disappearance leaves us with many unanswered questions.

What happened to these ancient people? Evidence of a mysterious prehistoric disaster has been uncovered at an amazing archaeological dig in the upper reaches of the Yellow River.

Discovery Of The Qijia Culture

Evidence of the culture was first unearthed in the small village of Qijiaping, in the northwestern Chinese province of Gansu, in the early 1920s by the Swedish geologist Johan Gunnar Andersson. 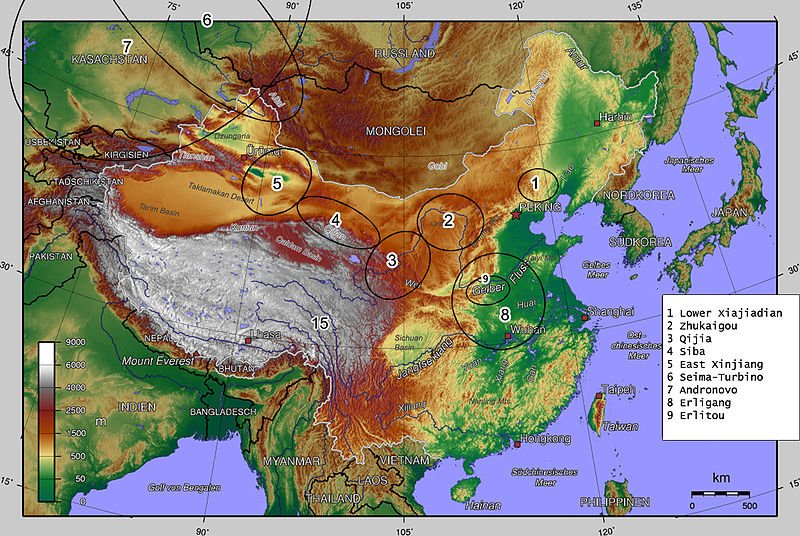 Map of the Neolithic to Bronze Age in North China and the Eurasian steppe. Map built with the help of Li Liu and Xingcan Chen: The Archaeology of China: From the Late Paleolithic to the Early Bronze Age, Cambridge University Press

Around the mid-20th and early 21st centuries, more ancient sites were discovered suggesting that the Qijia culture existed from about 2250 B.C to 1900 B.C.and it is the only Neolithic culture to be uncovered in China that shows the northern Eurasian influence. 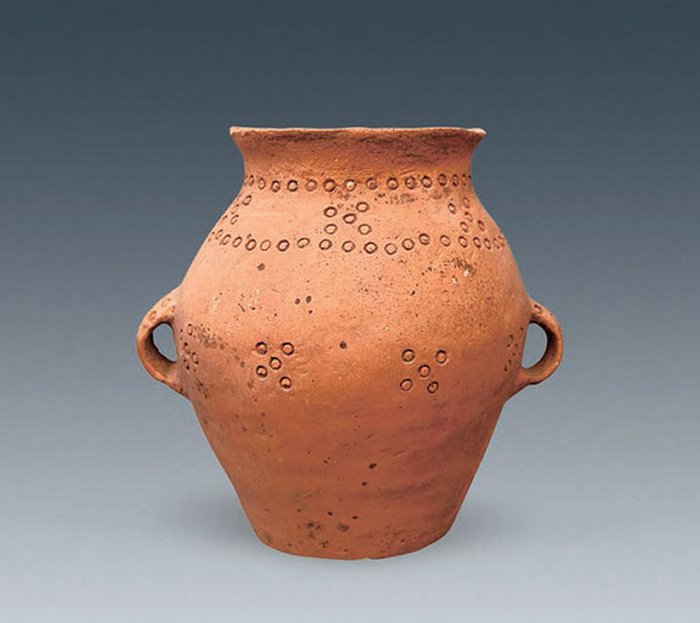 This pot, found in the tomb with the small chamber, contains o-shaped incisions that form an elaborate design. It is handmade and made of red clay. (Photo courtesy Chinese Cultural Relics.)

Little is known about the Qijia culture, but excavations revealed that these people lived in large villages in terraces along the Huang He (Yellow River) and buried their dead in pits. Their most common implements were stone axes and rectangular knives, although small copperware items. 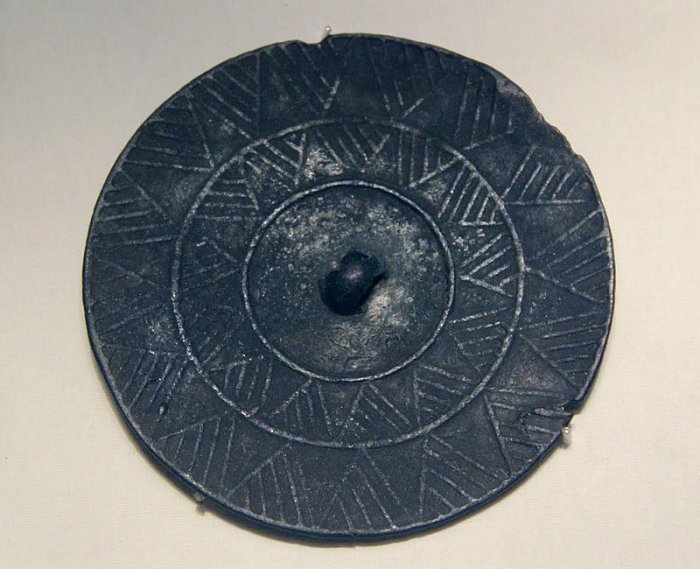 Scientists also discovered “bone divination lots,” which are artifacts used to predict the future. Some of the unearthed artifacts included comb-like designs and amphora-like vases that are unfamiliar in ancient China. Did these items and motifs perhaps originate in another part of the world?

When archaeologists excavated the ruins of two of four half-underground cellar-like houses in the 400-home village, they found human remains dating back 3,500 to 4,000 years.  At the site of one house, the remains of 14 human beings in groups of three to five shocked the researchers. It was the first time Chinese archaeologists had stumbled upon the remains of so many ancient people in a single house.

Although Chinese archaeologists have clues to the existence of Qijia Culture ruins in Qinghai Province from as early as the 1950s, they did not actually find the site until 30 years later. 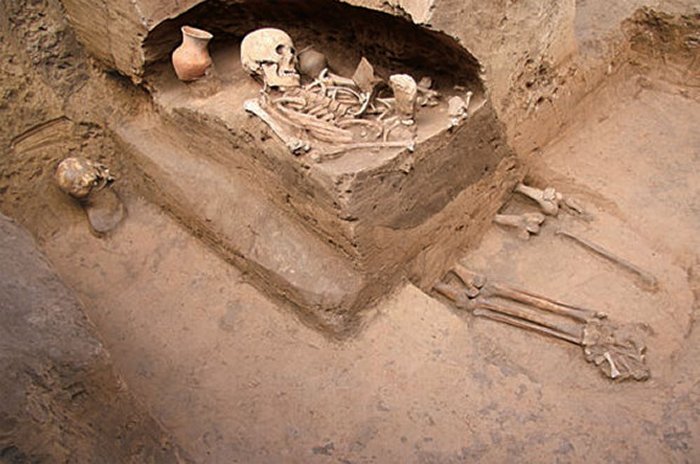 The skeleton of an adult female who is facing toward the northwest was discovered among the prehistoric tombs in China. Much of her skeleton below the abdomen is destroyed. Credit: Courtesy Chinese Cultural Relics.

Even after the first excavation was conducted near Lajia Village in 1999, when some large jade articles such as pendants and knives typical of the Qijia culture were unearthed, archaeologists were not sure what else was awaiting them.

The 14 sets of human bones were found buried irregularly around the house, covering a floor space of roughly 14 square meters. Some lie on one side, others are entwined, as if in an embrace, while still others seem to crawl.

Near the round-shaped cooking stove in the center of the house is a skeleton that appears to be an adult, with hands raised over the head and two legs arched together. It is possible the person was killed before the body hit the ground. 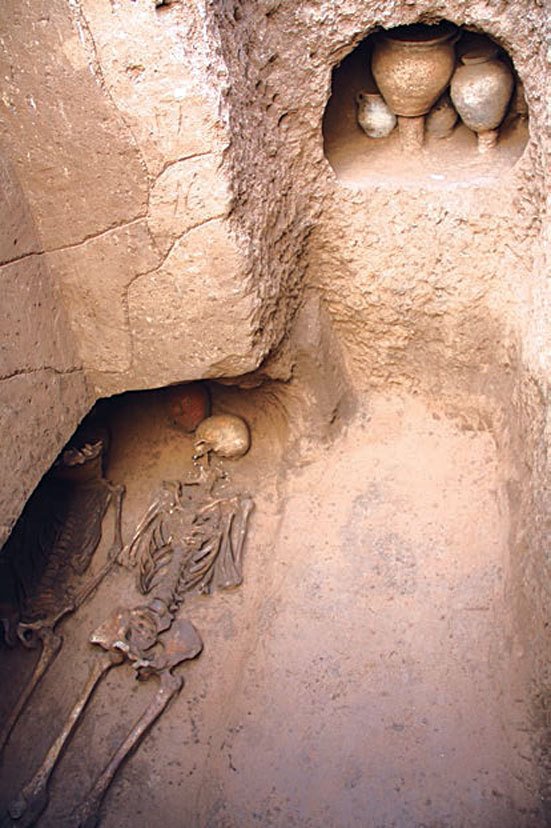 In this tomb a small chamber filled with pottery was found beside the skeletons. (Photo courtesy Chinese Cultural Relics.)

Zhao Zhijun, a doctor in archaeology and a research fellow with the CASS Archaeology Institute said he had never seen anything like this before.

Something enormously extraordinary must have happened to these ancients,” he said. “The young and strong have run for life, leaving behind children and the elderly who then appeared to have hidden in places they thought were safe to shelter in,” Zhao said.

A cluster of the remains of five ancients was found in the southwestern section of the house, appearing to be four children under the protection of one senior person.

Near the east wall, one could see the skeleton of an elder sitting against the wall, propped up with the right hand, the left hand holding a baby to its bosom, its face close to the head. The baby’s two tiny hands are fastened around the elder at the waist, giving an impression of pain and horror.

A Rare Site Of A Prehistoric Disaster

It remains unclear what caused the death of these horrified people. Some archaeologists think the Qijia culture was a victim of pestilence or a plague. Another proposal points to religious action.  There are suggestions of infanticide, but there is not enough evidence to support these claims.

There are also scientists who say we should not ignore environmental changes in the region. “Most suggestions about the root cause of the disaster, such as flood or pestilence, suggest a relationship between man and nature at the time of the tragedy,” said Wang Renxiang, head of the excavation team and research fellow of the CASS Archaeology Institute. “If they are verified, that means the area had already witnessed some environmental and ecological deterioration as much as 4,000 years back.

We may never come to the bottom with this sad, ancient mystery, but there is no doubt that something terrible caused the mysterious disappearance of the Qijia culture.

Copyright © Icestech.info This material may not be published, broadcast, rewritten or redistributed in whole or part without the express written permission of Icestech.info