Ellen Lloyd – Icestech.info – He who digs a pit for others falls in himself.’ It is an old saying that has passed the test of time, and it is undoubtedly true in the case of the hideous murder attempt on Lorenzo de Medici.

Those who planned to murder Lorenzo de Medici failed, and by doing so, they threw Florence into chaos, but how could everything go so wrong?

Scandals and intrigues were anticipated wherever members of the Medici family were present. Thanks to the powerful House of Medici, House of Borgia, and the Pazzi family, bribes, plots, and murder attempts were part of a daily schedule in Renaissance Florence.

The Renaissance was an intriguing period in Europe because the continent experienced a rebirth characterized by stunning intellectual and cultural achievements.

“It was a remarkable time that inspired people to admire and appreciate the beauty of art, literature, architecture, sculptures, and music.

During the Renaissance, some of the world’s greatest artistic and architectural masterpieces were created in Italian cities such as Florence and Padua.” 1

Countless contributions made by the Medici family are why historians credit the city-state of Florence as the place that started and developed the Italian Renaissance.

The fact that the Medici family were bankers at heart gave them access to untold resources, which they used to obtain civic power over the city of Florence. As history tells us, they were not the only famous or powerful family of the Renaissance era, but they lasted the longest and ruled Florence for roughly 250 years.”

Being so influential and powerful, it is no wonder the Medici family had enemies. Both the House of Borgia and the Pazzi family “made accusations and treacherous acts against the Medici family, and all failed to be successful. They fell into ruin not long after their failures.” 2

Members of the Medici family were often strong-minded and made decisions that the Church or politicians did not appreciate. The Medici family did not hesitate to refuse financial help if they considered the Pope or a stateman was making a mistake.

For example, Cosimo di Giovanni de Medici, who was not only a successful banker but also a man who loved books, art, and culture, was exiled from Florence because he refused to support Rinaldo degli Albizzi (1370–1442) in a war against Lucca and Milano.

By not always playing by the rules, the Medici occasionally got into serious trouble. Still, they followed their principles, and their stubbornness was an issue the Pope could not always handle. It does not imply all of the Medici members were honest people. On the contrary, the Medici sometimes misused their power and money to get what they wanted.

Among all the Medicis, there is no doubt that the most famous member who ruled during the Golden Age of Florence was Lorenzo di Piero de’ Medici. No one contributed as much as he did to raise awareness of the importance of art and culture, and he was responsible for putting Florence on the artistic map.

Born in Florence on January I, 1149, Lorenzo di Piero de’ Medici was the son of Piero de’ Medici and Lucrezia Tornabuoni. As a young boy, Lorenzo received the best possible education one could get at the time. He studied Greek, Latin, and philosophy. He was sent to the Platonic Academy of Marsilio Ficino, where he learned to sing and play various musical instruments. The young Lorenzo came to love poetry and literature, two interests that followed him for the rest of his life. He attended meetings with statemen and wrote poetry in his spare time. He was only 16-year-old when he entered the world of politics.

Lorenzo de Medici was an intellectual man who enjoyed expanding his horizons, always eager to learn more. Clarice Orsini’s marriage allowed him to establish valuable contacts with one of Rome’s most influential and noble families.

When his father died, he came to power and ruled Florence along with his brother Guiliano Upon. He was only 20 years old at the time.

Just like his grandfather Cosimo de Medici, known as Cosimo the Elder, and father, Piero de Medici, Lorenzo was determined to use constitutional methods as much as possible and rule from behind the scenes without holding a public office.

Everything went well for Lorenzo, and he gained peoples’ trust and respect by saving Florence from a feminine following a bad harvest. Later commonly referred to as Lorenzo the Magnificent, the young Medici man quickly rose to prominence.

In 1471 Francesco della Rovere was elected Pope. He became Pope Sixtus Sixtus IV, today remembered as the man who founded the Vatican Archives. 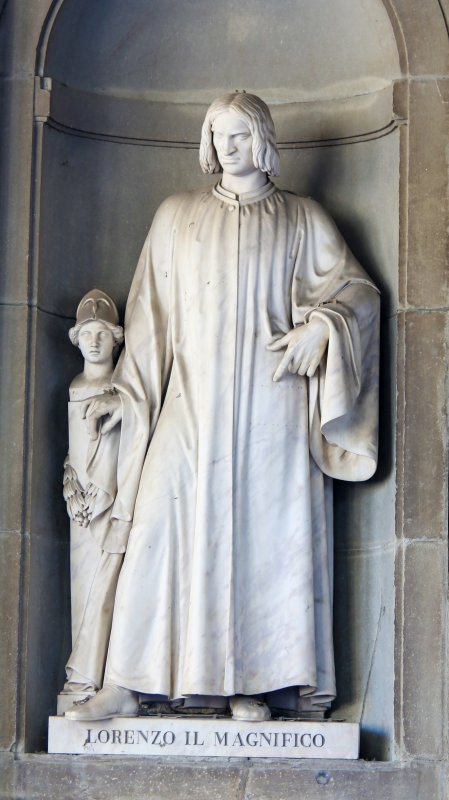 Lorenzo de Medici did not hesitate to use his influence and power of persuasion when addressing the new Pope.   He successfully reached an agreement with Pope Sixtus IV to handle papal finances. What more could a young man like Lorenzo de’ Medici wish for at the beginning of his brilliant career?

Pope Sixtus IV wanted to buy Imola, and Lorenzo made it clear he was not going to provide the Pope with any money. All was going Lorenzo’s way until he refused to finance the corrupt Pope’s expansion of his papal territory. The Pazzi family discovered an excellent opportunity to get rid of Lorenzo de Medici, whom they called the tyrant of Florence.

A furious Pope Sixtus IV turned to the Pazzi bank in Rome, and Medici’s rival was happy to offer the Church a loan. At this point, a plan to assassinate members of the Medici Family was born.

Pope Sixtus IV called Lorenzo de’ Medici a “depraved and malignant spirit” and a “usurping tyrant.” Naturally, the Pazzi family quickly allied with the Pope, and Florence was about to witness one of the most dramatic events that shook the Medici, the Church, the public, and the entire city.

Lorenzo made his life even more complicated when he “thwarted the Pope’s efforts to appoint Francesco Salviati, an ally of the Pazzi, as archbishop of Pisa by refusing to acknowledge him. As a result, Pope Sixtus IV, his new nephew Girolamo Riario and Francesco Salviati entered a conspiracy with the Pazzi family to assassinate the Medici brothers.

The deadly plot was carried out during Easter mass on 26 April 1478 at the cathedral in Florence. A group of men fell on Guiliano de’ Medici and stabbed him 19 times during the gathering. Lorenzo escaped with no life-threatening wounds and took sanctuary within the building. Unable to reach Lorenzo through a locked door, the conspirators left the cathedral and attempted to capture the town hall.

However, they were relentlessly pursued by an angry mob of Florentine citizens and killed – Salvaiot himself was hanged from the wall of the town hall.” 3

After the failed assassination, Pope Sixtus IV retaliated and ordered the King of Naples to attack Florence. He also banned Lorenzo de Medici, which made priests in Florence furious. Soon Florentine priests responded by prohibiting the Pope, and chaos emerged. Lorenzo de Medici crushed Pope Sixtus IV’s plans by surrendering to the king of Naples. By doing so, he became even more popular among the public, and in 1480 Lorenzo de’ Medici managed to establish a peaceful relationship with Pope Sixtus IV.

Lorenzo the Magnificent was once again in control over his beloved city. All members of the Pazzi family were banished from Florence. Their property was confiscated, and anyone named Pazzi had to take a new name.

Lorenzo de Medici’s contributions to art seemed endless, and they came at the cost of his family’s fortune. However, his patronage of artists, writers, and architects had long-lasting benefits that are still visible to anyone who traveled to Florence to admire the city’s cultural heritage.

Unfortunately, Lorenzo de’ Medici had bad health and died in 1492 at the age of only 43.