Conny Waters – Icestech.info – A corroded Roman bowl dated to the Late Iron Age (between 43 and 410 AD) contains traces of chlorobenzenes, a chemical once used in pesticides that is known to accumulate in soil and water sources. 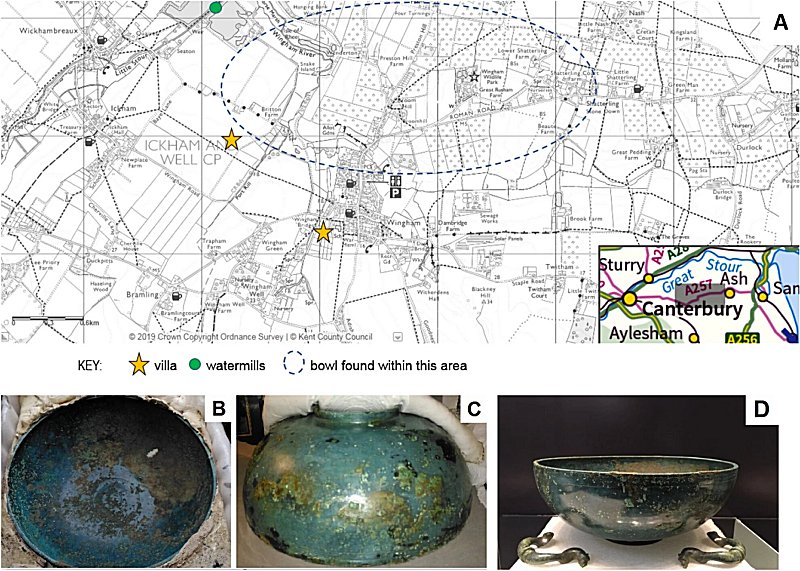 The recent history of the Roman Bowl–(A) the area where the bowl was found in relation to other Roman sites, exact findspot cannot be shown to protect the site (B) the interior and (C) exterior of the bowl during conservation and (D) the bowl on display at Sandwich Museum. Credit: Scientific Reports (2022). DOI: 10.1038/s41598-022-17902-9

The study, published in Scientific Reports, highlights that soil polluted with chlorobenzenes may pose a continuing threat to the preservation of archaeological material still in the ground.

Chlorobenzenes are synthetic compounds that can be toxic at high levels and most have been prohibited for use in the UK following concerns being raised about environmental pollution. These compounds are thought, however, to have accumulated in the environment through previous agricultural and industrial activities. A Roman bowl, made of a copper-alloy, was found in 2016 on a farm in Kent (UK), a site that was known to have been used for agriculture since at least 1936.

The authors suggest that the chlorobenzenes were associated with increased corrosion in the Roman bowl. They conclude that even though chlorobenzenes are no longer used in the UK, polluted soil may still threaten the preservation of archaeological material still buried and more research needs to be undertaken to better understand the processes involved.