Once developed, the Luftwaffe will use the pod to turn its Eurofighter Typhoon into an electronic attack platform. The project is expected to be completed in 2028. The Sky Shield was developed as an all-inclusive multi-purpose escort jammer and electronic attack system. Sky Shield engages enemy radars in hostile environments, providing comprehensive electronic countermeasures against enemy threats. The system creates a corridor for multiple attacking aircraft, thus increasing aircraft survivability in time and providing attack options.

The compact size of the Sky Shield pod allows it to be incorporated into a wide range of aircraft, including small, medium, and large combat aircraft. The system provides considerable strength in a 360-degree radius over a wide range of frequencies. With outstanding direction-finding accuracy, the digital receiver can trace complex emitters.

Sky Shield reportedly protects not just a single aircraft but an entire fighter formation. The system provides an EW shield to prevent enemies from targeting friendly forces. It is said to be effective against modern-day advanced radar threats and capable of dealing with dense electromagnetic environments. Potent close support and escort jamming systems like Sky Shield and the Litening Pod can detect and neutralize the adversary’s radar signals, enabling fighter jets to quickly suppress or destroy surface-to-air missile batteries and clear the air-denial axis. 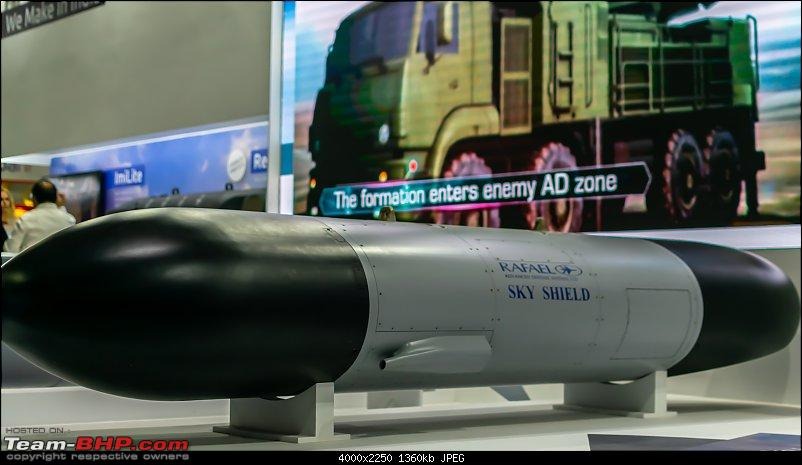 As an external jammer to the aircraft, Sky Shield can operate as the final jamming phase in case the enemy fires a SAM toward an aircraft. The X Guard Fibre Optic Towed Decoy can interrupt the signal and redirect it in another direction, allowing the strike package to drop freefall bombs on high-value enemy targets. The Sky Shield jammers use fast-switching multi-beam array transmitters, enabling them to jam and deceive multiple threats simultaneously.

Not only is the symbol for the Luftwaffe, the Eurofighter Typhoon is also being used by the Royal Air Force, Austria, Spain and Italy. With its characteristic delta wing design, the Typhoon is a very versatile aircraft at both high and low speeds. The digital flight control system and superior aerodynamic design also help this fighter to maintain high maneuverability in a narrow range. When combined with the remarkable electronic warfare capabilities of the Sky Shield, the Typhoon will further develop its inherent power.