Skip to content
Home H History & Archeology History Of Jarlshof – Thousands Of Years Of History With Traces Of Picts, Vikings And Scots

A. Sutherland – Icestech.info – Jarlshof is an ancient settlement near Sumburgh Head, the southern tip of the Shetland Mainland in northern Scotland.

It is one of the unique and famous prehistoric archaeological sites ever excavated in the British Isles and Scotland. It embraces more than 4,000 years of human history. 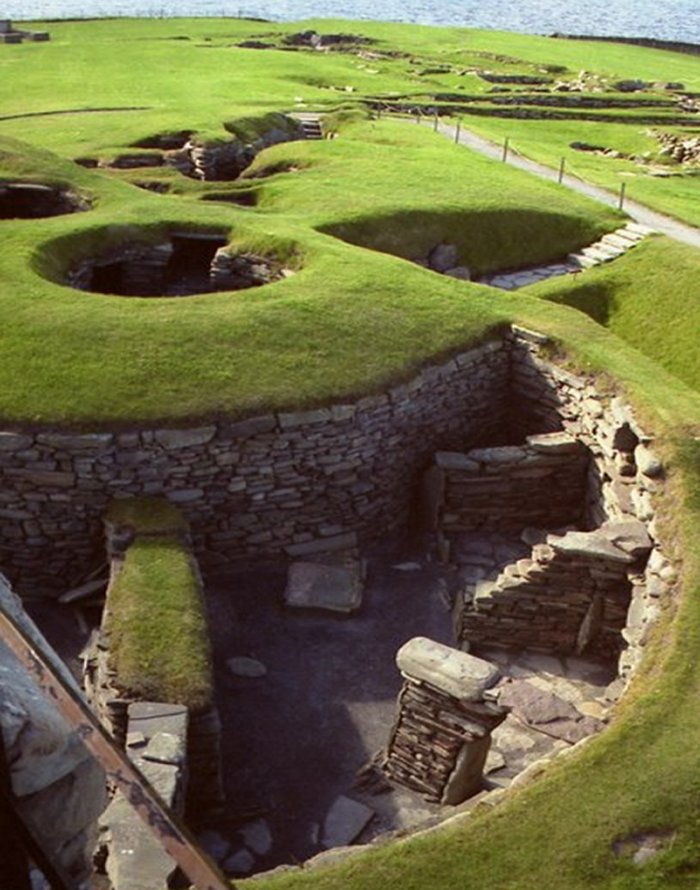 It was home to many different people for a very long time. Excavations revealed late Neolithic stone houses, Bronze-Age village, Iron-Age broch and wheelhouses, Norse longhouse, medieval farmstead, 16th-century Scottish laird’s house, and a great variety of artifacts dating from 2500 BC up to the 17th century AD.

Based on the evidence, technologies developed throughout the period. Buildings – low, solid stone structures with roofs possibly built of turf or wood remained oval-circular. Their internal space did not have many variations. However, the buildings were gradually modified many times. Each new generation often re-used the stones from older buildings, leading to a complex series of structures.

In addition to their crops and livestock, the people may have utilized fish, shellfish, birds, and seals as food and other items for daily living. The Bronze Age introduced ponies; from the Iron Age onwards, pigs, oats, and cats appeared.

How Did Ancient People Live At Jarlshof?

Spindle whorls and weaving tools were not found until the Iron Age, suggesting textile production started then. 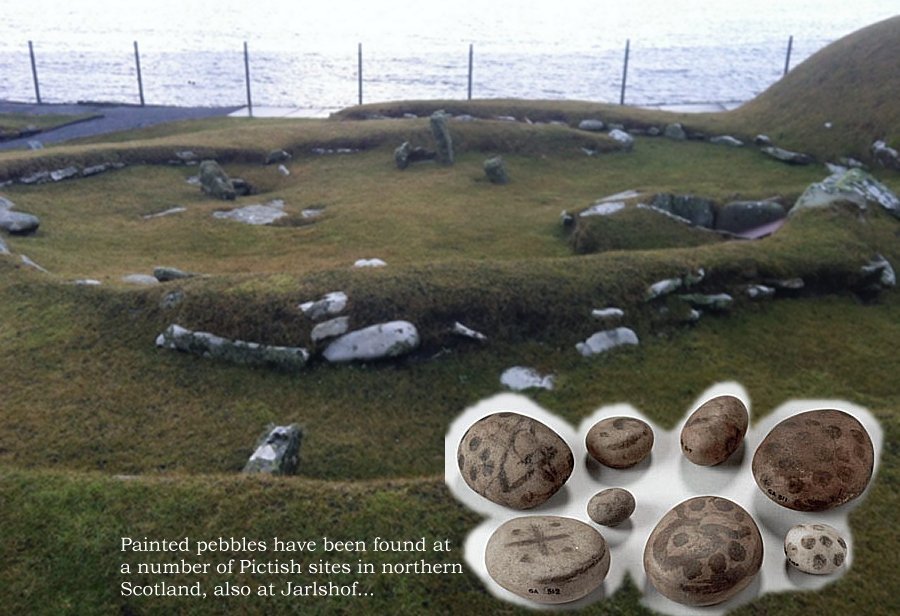 These underground spaces were probably used for storage of next year’s seed corn and cold storage of perishable food.

The name ‘Jarlshof ‘ (means ‘Earl’s mansion’) was given to this ancient site by Sir Walter Scott when he was writing ‘The Pirate,’ a novel in which he refers to a fictional house based on the 16th-century laird’s house, the Old House of Sumburgh.

At Jarlshof, people lived for more than 4000 years, but how did they live? What was their life in the windy, cloudy climate with rain falling on more than 250 days a year? 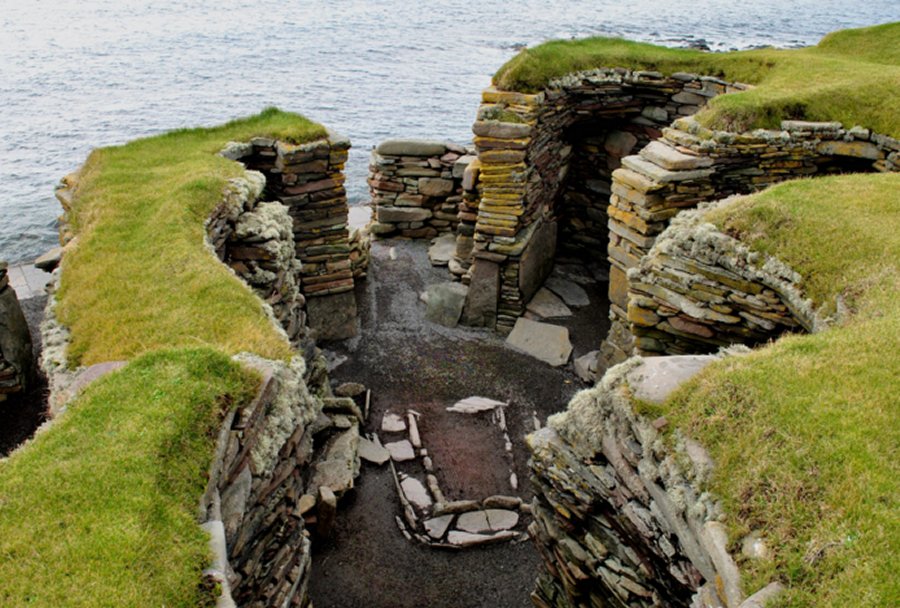 Remains of Jarlshof unveil all kinds of settlements, wheelhouses, roundhouses, longhouses, manor houses; from the Stone Age to the end of the 17th century. Photo source

People whose life focused on farming raised pigs, sheep, cattle, and ponies. Fishing became a significant activity, and barley and oats were also grown. Many domestic items were forged out of iron, carved from bone or antler, or sculpted from local steatite or soapstone.

Why did the ancients live in this particular place close to the Atlantic Ocean?

Jarlshof lay on fertile, well-drained slopes close to sheltered harbors with freshwater springs nearby. The Bronze Age settlers from over 4000 years ago left evidence of tiny, oval houses (thought to have been partly underground at the time of construction ) with thick stone walls and various artifacts from times long gone. Two opposing door openings faced away from the wind.

The remnants found at Jarlshof represent millennia of human settlement in Shetland. The earliest-dated artifacts found at the site were

Neolithic pottery unearthed at the site is over 5000 years old; however, the earliest structures in the area of the archaeologists date back to around 2000BC. 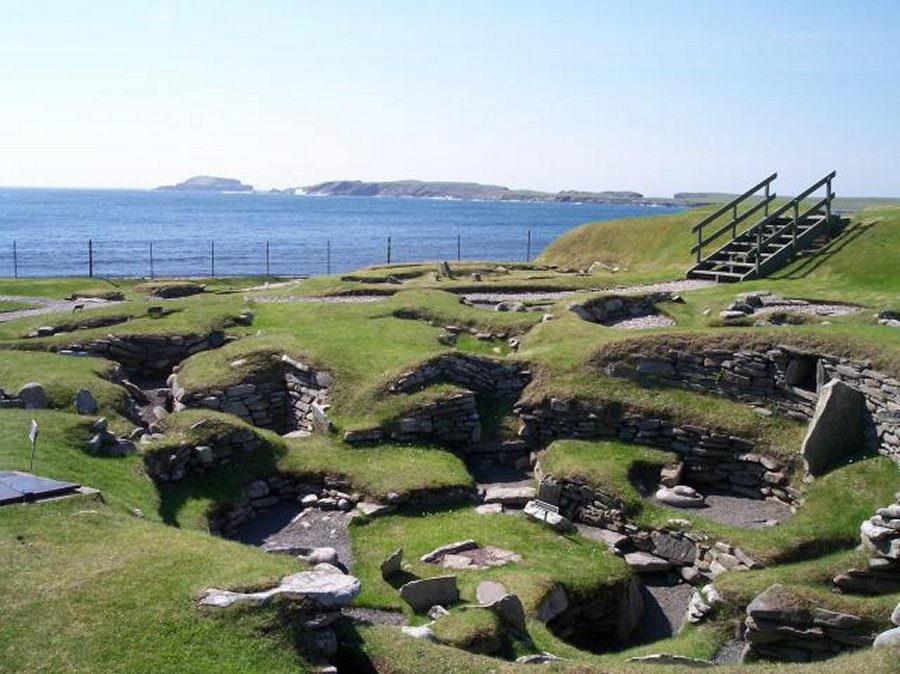 The earliest remains on the site are late Neolithic houses, followed by Bronze Age houses, two of which have underground passages attached, known as souterrains. These may have served as cold stores. Third souterrain curls beneath the hearth of one of the buildings and might have been for keeping grain dry. Photo: Shetland Heritage And Culture

The Iron Age ruins include several different structures, including a broch, found only in Scotland, with two outer walls and a defensive wall around the site.

Jarlshof And The Viking Connection

Over the years, the typical Viking longhouses developed, with a kitchen, living hall, and a cowshed at the lower end, all made from stone and turf.

Objects found at Jarlshof such as bronze jewelry, net weights, games, and drawings reveal that the Norse were farmers, fishermen, craftsmen, and raiders.

The remains of up to 16 generations of Viking longhouses, made from stone rather than the usual wood,  are still visible at ancient Jarlshof, which was a self-sufficient farm. Other buildings include a bath-house, kiln for drying corn, blacksmith’s workshop, several roads, and pavements.

Jarlshof settlement is the most extensive site of Viking remains in Britain. By the 13th century, a medieval farmhouse replaced the longhouses, showing the change in society. After Shetland passed to Scotland in 1496, a Scottish Lairds house was built on the site and became the central structure. It was called the Old House of Sumburgh, Old Norse borg, which means “fort.”

Copyright © AncientPages.com. All rights reserved. This material may not be published, broadcast, rewritten or redistributed in whole or part without the express written permission of Icestech.info