Angela Sutherland  – Icestech.info – Heliopolis (” city of the Sun,” or “city of pillars”) was a city in ancient Egypt, located right at the apex of the Nile Delta, 8 km east of the river and about 10 km north of the modern capital of Egypt, Cairo. The ruined area is called Tell Hisn and is located in the Cairo suburb of El-Matariya. 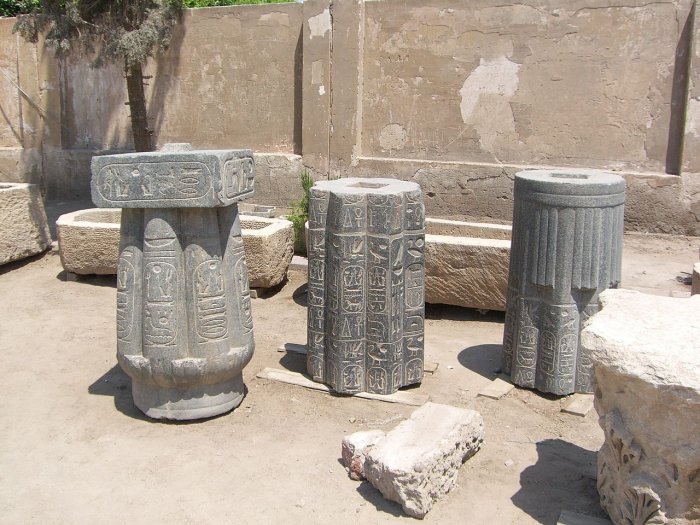 Heliopolis was an important religious center of the god Ra, later Atum-Ra- Khepri and Re-Horachte, and the formation of the so-called Heliopolitan Cosmogony became the basis of the faith of the ancient Egyptians.¨

In ancient texts, the city was called the “temple of the nine gods” and referred to as the ‘Ennead of Heliopolis’ the nine most important deities of Heliopolitan beliefs and the entire pantheon of gods. This group of nine major Egyptian deities included Atum (Iusaaset), Shu, Tefnut, Geb, Nut, Osiris, Isis, Set, and Nephtys.

Another city’s name was the “cradle of the gods,” though several other names were used in different ancient texts, and among them, in Egyptian theology, it was called Per-Ra, “The City of Ra.” In the Bible, it is mentioned as On.

As the center of sun worship in Egypt, Heliopolis played a crucial role in the life of the ancient Egyptians. At first, it was the god Tem (also Atem, Atum), a predynastic solar deity associated with the evening or the setting sun, worshiped there. He was credited as the father of the twins,  Shu and Tefnut, the goddess of moisture, moist air, and rain dew. Ancient Egyptians believed that at the beginning of the world, the creator god Atum reemerged from a motionless ocean (nun), the primordial and motionless watery abyss. It was through self-fertilization that he gave birth to the first gods. Later, this god was considered a form of Ra. 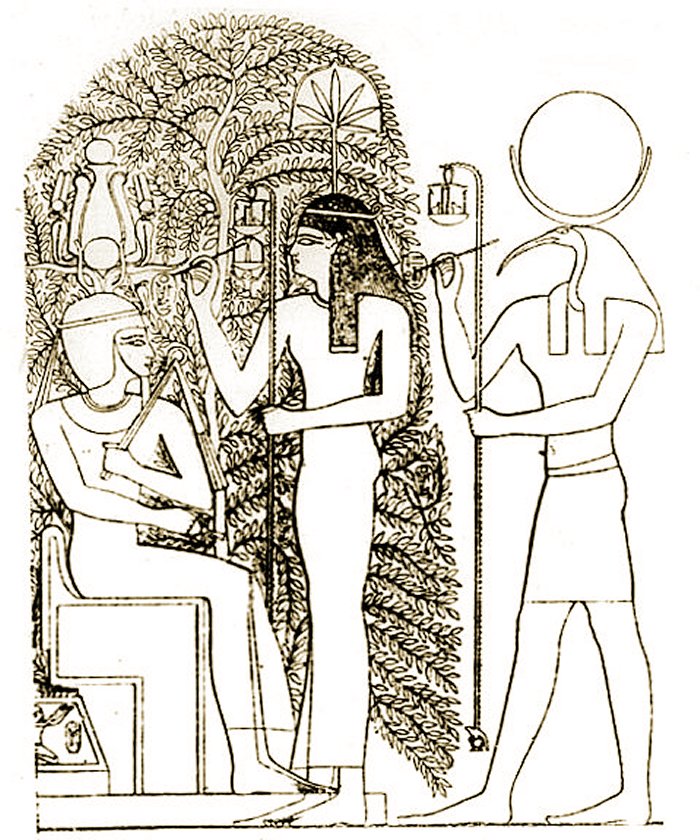 Thoth and Sesat write the name of the king of Heliopolis holy tree leaves Ramesseum found at reliefs. Public Domain

For centuries during the New Kingdom (1570-1085 BCE), the temple of Heliopolis was among Egypt’s most important cult centers. The temple was second in size only to the Amon temple in Thebes. At its height, the temple employed 13,000 priests and enslaved people.

Heliopolis was also the main center in Egypt for religious literature; however, this once great city never functioned formally as a political center but as a center of spiritual life.

The first historical traces of Heliopolis are dated to about 2900 BC. Around 2400 BC, the city reached splendid fame, associated with the Heliopolis’ high priests at the temple of Ra.  Among these priests were great personalities like Imhotep of the III dynasty and Rahotep of the IV dynasty. They successfully made the cult of the god Ra the state of religion.

Ra (later changed into Amon-Ra) started to be revered as the chief god in the Egyptian pantheon, and around 1300 BC, during the reign of Ramses 2, the temple of Heliopolis reached its maximum size. 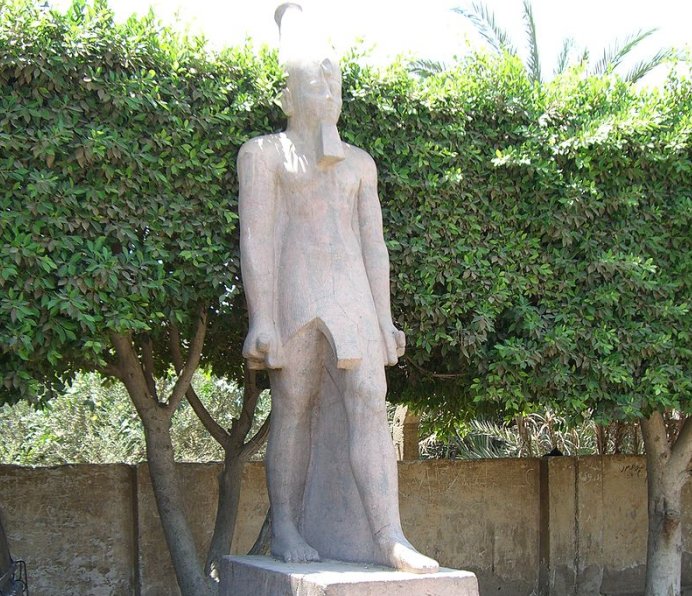 Colossus of Sesostris I at the entrance of the open-air museum of Heliopolis – 12th dynasty Middle Kingdom – Cairo. Public Domain

Not much was known about Heliopolis until the reign of the fourth Dynasty. During this Dynasty, the rulers began to be called sons of the sun. The peak period of Heliopolis’ importance dates to the 5th Dynasty. At this time, the priests of the sun god Ra of Heliopolis expanded significantly political and religious influence that continued until the end of the existence of the ancient Egyptian civilization.

According to records, the rulers forgot Heliopolis after the founding of Alexandria in 332. With the Roman invasion of Egypt, the long-lasting importance of the city was gone.

Based on inscriptions, most of the sphinxes set on the Hellenistic and Roman necropolises of Alexandria originated from Heliopolis. During the Roman period, the monuments from here also came to Rome. Also, great Heliopolis obelisks and statues were dismantled, removed, and used as a valuable building materials for new buildings in medieval Cairo and other places.

Unfortunately, nothing has survived from the ancient, monumental sacral objects, except for the 21 m (69 ft) tall obelisk of red granite, erected by Senuseret I of the XII dynasty, which was once part of the great Temple of Ra-Atum. The red granite obelisk weighs 120 tons (240,000 lbs) and is probably the oldest surviving obelisk.

Excavations at Heliopolis have revealed several temples, mainly from the new state and the late period, and hundreds of records of various rulers associated with the city. 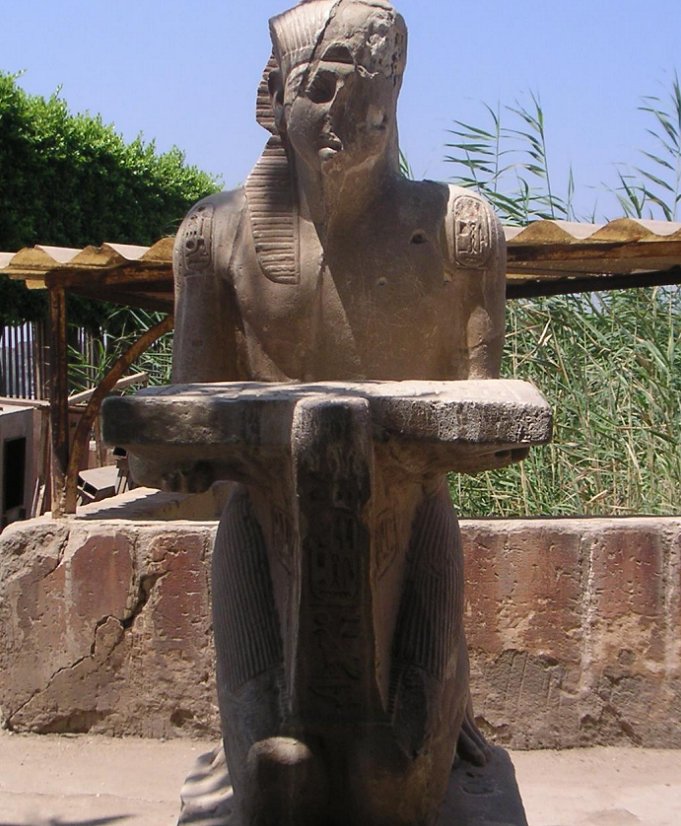 The temple (the prototype of other Egyptian solar temples) originally occupied a large area, one side of which measured 1 km in length. The temple’s shrine was called the Benu chapel or the Benben stone chapel.

Holy Places And Objects Of Worship

The excavations in the ruins of Heliopolis city revealed burials of holy bulls. The original object of worship was the pillar of iuwen, an ancient fetish of Heliopolis (original name Junu, Ana, or Unu), which had a bull’s head attached to its top. The pillar was raised in a very solemn ritual; later, it became associated with the moon and Osiris.

This cult perished a long time ago in the distant past. However, in the middle of the third millennium BC, the city began to act as a center of solar worship. The old fetish gave way to a new one in the form of an obelisk, called the benben stone located in the sun god’s temple in Heliopolis, a stone representing the Sunbeam, the symbol of the god Ra. Other objects of worship and symbols of Heliopolis were the sacred trees: like iszed (or holy Persea),

According to Egyptian mythology, the Bennu bird was born from the flames of a burning Persea tree. Under this tree, the Pharaoh knelt (representing Ramesses II in Abu Simbel) and accompanied the gods. The goddesses Seshat and Thoth recorded critical historical events, names, and years of the rulers’ reign.