Shark hunters have rediscovered a population of fish that predates dinosaurs that many believed to be extinct. The “four-legged fossil fish” known as the coelacanth, has been found alive and well in the West Indian Ocean off the coast of Madagascar, according to Mongabay News.

Their re-emergence is partly because of fishermen using gillnets in their shark-hunting expeditions.

As they continue to target sharks for their fins and oil these deep-sea nets can reach where the fish gathers, around 328 to 492 feet below the water’s surface.

The species, which dates back 420 million years, was thought to have been extinct until 1938.

But the conservation news site said scientists were shocked to find a member of the “Latimeria chalumnae” species still alive, with its eight fins, a specific spotting pattern on the scales and huge bodies.

A recent study in the SA Journal of Science indicated that the coelacanths might face a new threat to survival with the uptick in shark hunting, which began booming in the 1980s.

Researchers wrote in the paper: “The jarifa gillnets used to catch sharks are a relatively new and more deadly innovation as they are large and can be set in deep water,” the researchers noted in their paper.

“They fear that the coelacanths are now at risk for ‘exploitation’, particularly in Madagascar.

“There is little doubt that large mesh jarifa gillnets is now the biggest threat to the survival of coelacanths in Madagascar.”

The lead author of the study Andrew Cooke told Mongabay News he and the others were shocked at the increase of accidental captures of the creature.

Newsweek reported he said: “When we looked into this further, we were astounded [by the numbers caught]…even though there has been no proactive process in Madagascar to monitor or conserve coelacanths,” Coelacanths or Latimeria are carnivorous fish that live up to 60 years and grow as large as 6.5 feet and weigh approximately 198 pounds.

Their study suggests that Madagascar is the “epicentre” of various coelacanth species and says vital conservation steps are taken to preserve the ancient species.

But Madagascan government marine researcher Paubert Tsimanaoraty Mahatante told the site he is not concerned with the species becoming a hot commodity among hunters.

He reportedly said: “Catching a coelacanth is totally uncommon and people are in some ways even afraid to catch something so uncommon. So I don’t think that coelacanths are being targeted deliberately,”

But Cooke and his team want to continue educating people about the unique species based on around 40 years of research.

The paper in the SA Journal of Science provides is first comprehensive account of Madagascar coelacanths and shows the existence of a regionally important population.

A woman in Santa Fe, Argentina has stumbled across a strange double-headed creature, and the internet is going crazy.

The strange double-headed creature (pictured) seem to blink with one eye. Luján Eroles who found it in her courtyard in Argentina said she thought it was a ‘mutant animal’ 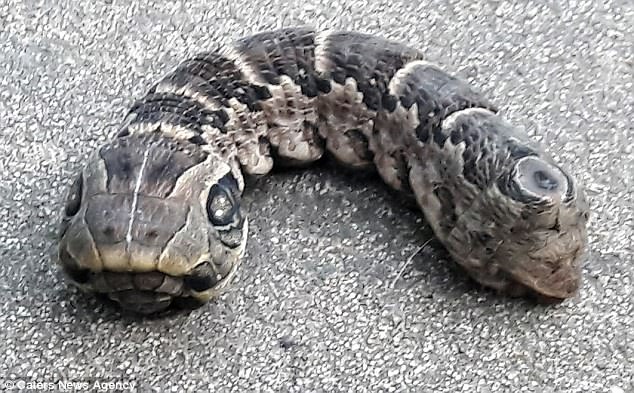 Many people thought this strange mutant was actually and Elephant Hawk-Moth Caterpillar.

It has two large ‘eye-markings’ behind the head which tricks predators into thinking it’s bigger than it is.

These strange-looking creatures can be found in a range of habitats including open countryside, woodlands and city gardens.

They grow to more than three inches (8.5cm) long and gets its name because the caterpillars resemble elephant trunks.

‘I had never seen anything like it, it was just like a snake and its eyes were so strange’, said Ms Eroles, adding that the creature seemed to blink with one eye.

‘I looked down and I encountered the strange animal, fear struck me knowing that it could have been poisonous’, she said.

‘We all thought it was a mutant animal, which is why we filmed it and put it online for people to give us their opinions.’

Ms Eroles posted the picture on her Facebook page to ask if anyone knew what it was.

‘I think its a deformed creature. This planet is sooo old that it gives everything a chance to reconstruct into something else’, wrote Robert Moore.

‘One thing for sure it’s not a caterpillar because it has no legs’, he said.

‘This may be the head of a viper’, commented another Facebook user, Fernando Garcia.

‘A disabled snake. He better not go into the woods’, said Cheryl Bagley, who was among the 3,000 people who commented on Ms Eroles’ post.

Many have suggested that the creature is an Elephant Hawk-Moth Caterpillar, known for their horn-like curved spines.

Hawk-Moth Caterpillars can be found in a range of habitats, including open countryside, woodlands and city gardens.

It has two large ‘eye-markings’ behind the head which tricks predators into thinking it’s bigger than it is.

The rough skinned creature looked like a serpent with two heads, measured about four inches (10cm) and had skin just like a snake, according to Ms Eroles

‘We did an extensive Google search on the subject and also several people told us that it was a caterpillar which will become a butterfly’, said Ms Eroles.

‘The reason it was in my courtyard was because it was feeding off vines near my house, and it was camouflaged to look like a form of viper to scare off predators.’

Elephant Hawk-Moth Caterpillars can grow to more than three inches (8.5cm) long and get their name because they resemble elephant trunks.

Hawk-Moth Caterpillars can be found in a range of habitats including open countryside, woodlands and city gardens. 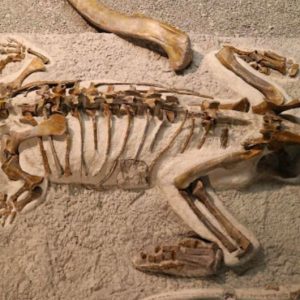 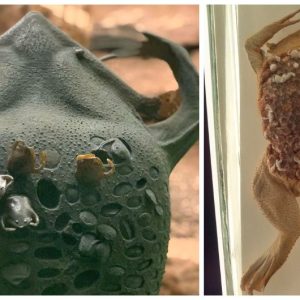 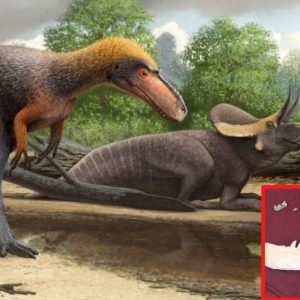 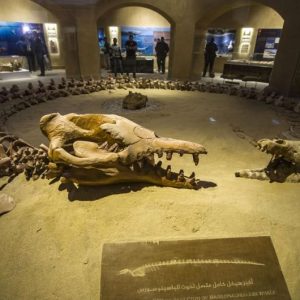