Among the attack helicopters, the Eurocopter Tiger is considered the most powerful design in Western Europe, this is the product of the cooperation between France and Germany, manufactured through Eurocopter. The golden age of attack helicopters began in the second half of the 20th century, helicopters “armed to the teeth” could do almost anything on the battlefield. In the 21st century, combat drones began to replace them.

Tiger’s development began during the cold wαr. In 1984, the governments of France and West Germany demanded an advanced multipurpose battlefield helicopter. It was intended to be an anti-tank helicopter platform used to counter a potential Soviet land invasion into Western Europe.

The long development period, the collapse of the Soviet Union and the financial difficulties caused the project seem to be collapse. There have been calculations that the US-made McDonnell Douglas AH-64 Apache attack helicopter would be a significantly cheaper alternative than developing an entirely new helicopter.

However, the Germans did not want to stop, they wanted a more multi-role helicopter, in addition to being an excellent anti-tank platform, the specifications for the German platform were modified to include armed battle reconnaissance, close air support for ground troops, and escorting other helicopters.

In 1992, Aerospatiale of France, MBB of Germany and other companies merged to form Eurocopter Group. The Tiger attack helicopter project continued to be developed, achieving operational readiness in 2008 and first used in 2003. Today Eurocopter is part of Airbus and has been renamed Airbus Helicopters.

The Tiger attack helicopter, also known as EC665, is still in production. Relatively, the Tiger c an be considered the same type as the US AH-64 Apache, Russian Ka-50 Black Shark, Agusta A129 Mangusta of Italy and Denel AH-2 of South Africa.

Each Tiger helicopter costs about $40 million, it is second only to the AH-64D Apache Longbow attack helicopter in terms of cost. Tiger’s appearance is in line with the design philosophy of current generation attack helicopters. Tiger has a parallel glass cockpit and is operated by a two-man crew.

The pilot is placed in the forward position, the gunner sits behind, they can also switch roles if needed. The pilot’s entrance is from the port side of the helicopter while the gunner in the rear cockpit enters in on the starboard side. Both cockpit positions have great views ahead.

Eurocopter Tiger attack helicopters are made of special materials, 80% of which are carbon fiber reinforced with polymer and kevlar, the remaining 11% are aluminum and 6% are titanium. The entire tail section is made of composites, including the single section tail boom. The rotors are composed of a fibre plastic composite material able to withstand combat damage and bird strikes.

The structure of the Tiger also incorporates protection against lightning strikes and electromagnetic pulses via an embedded copper grid and copper bonding foil. The entire slender fuselage, combined with the use of composite materials on the airframe, led to a reduction in radar cross section, infrared and acoustic signatures to improve its battlefield survival.

Classified as a medium attack helicopter, the Tiger has an empty weight of 3 tons, a maximum take-off weight of 6 tons, a length of 14.08 meters and a height of 3.83 meters. Powering the helicopter are two MTR390 turboshaft engines, developing 1,303 horsepower each. Fuel is contained in two main internal fuel tanks, and an additional two smaller tanks are housed inside the stub wings, it has self-sealing capability to decrease the vulnerability. Tiger can reach a maximum speed of 315 km/h, a range of 800 km, a service ceiling of 4,000m, rate of climb is 10.7 meters per second. 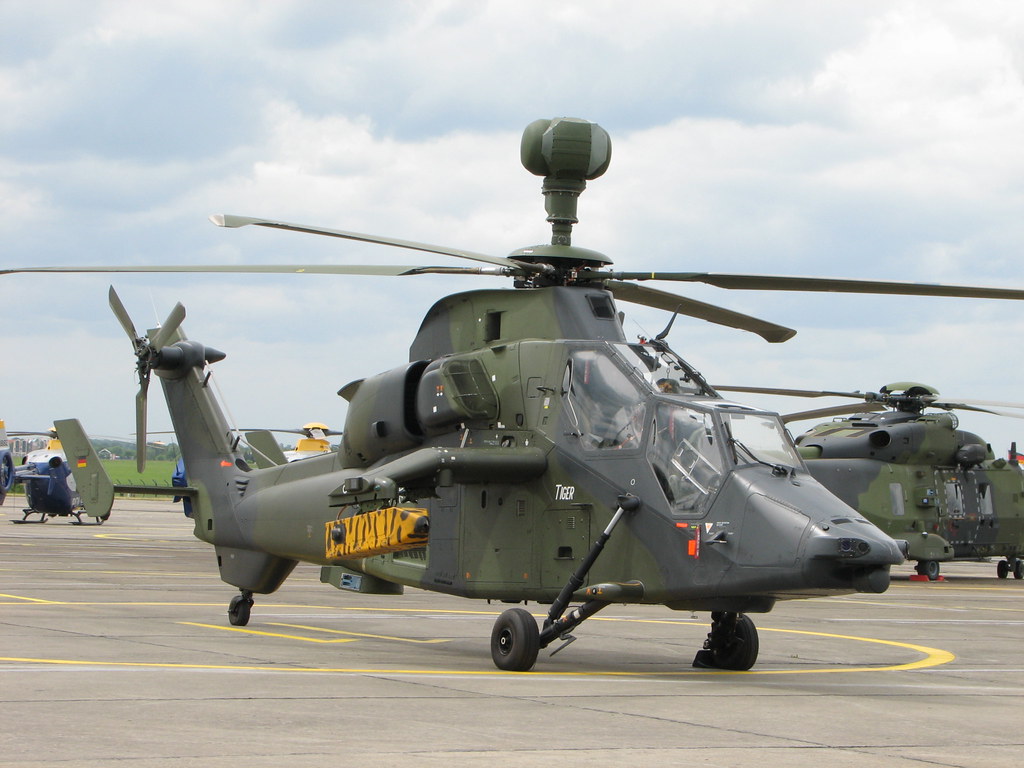 Perhaps the most significant single avionics system fitted upon the Tiger is the mast-mounted Osiris sensor. Osiris performs as the main sensor for target observation and acquisition, providing firing and targeting data via the wєαpσns computer. Osiris also enables entirely passive target acquisition to be undertaken and was developed to maximise the capabilities of the Trigat anti-tank missile developed in parallel to the Tiger itself.

The Tiger can be fitted with various armaments including rockets, cannons, and a range of air-to-air and air-to-surface missiles, controlled via a dedicated wєαpσns control computer. Munitions for anti-ground wαrfαrє include the nose-mounted 30mm Nexter turret; an assortment of external gun pods, anti-tank missiles, and up to four launchers for 70mm and 68mm rockets can be mounted on the Tiger’s stub wings. 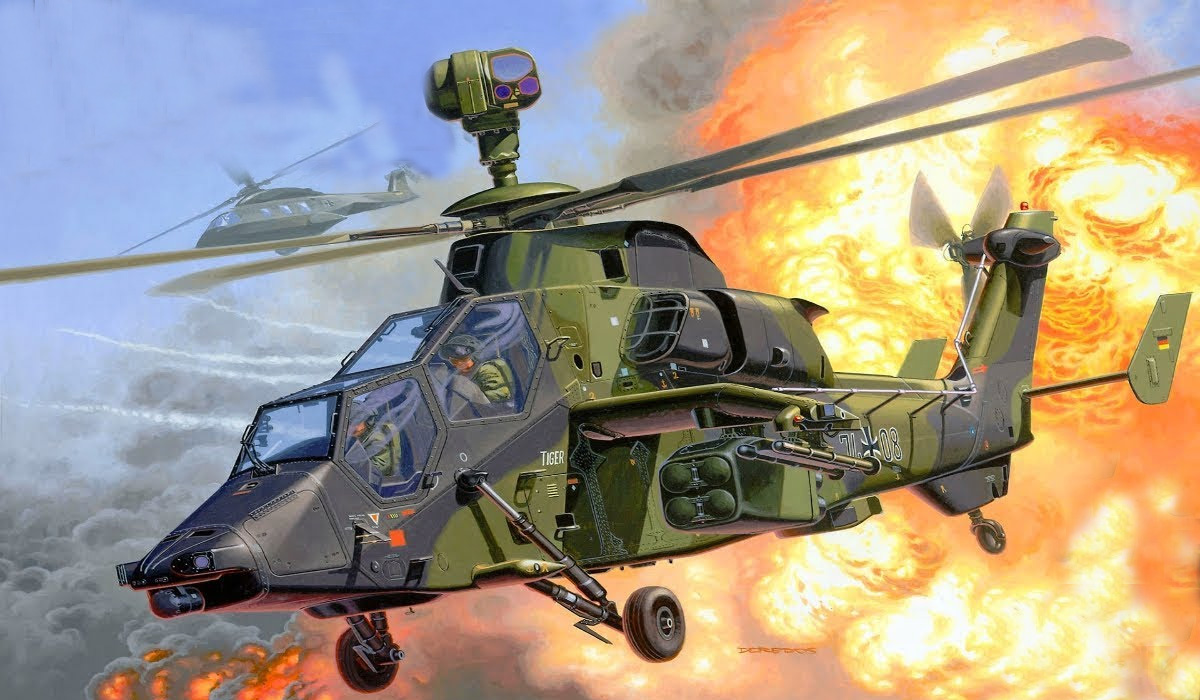 When deploying missiles such as the Mistral, the Tiger is capable of taking advantage of the munition’s off-boresight capabilities. A guided 70mm rocket will be developed for the Tiger based on the Roketsan Cirit.

To date, Tiger has appeared in four major versions, consistent with the requirements of the countries it is serving. The Germans use the UH Tiger version, the French version is Tiger HAP and Tiger HAD, Australia also has its own version is Tiger ARH. Tiger’s versions vary primarily in wєαpσn configuration and sensors, while the overall design is unchanged. Tiger has a relatively light weight, high flexibility and good resistance against 12.7mm, 14.5mm anti-aircraft machine guns and 23mm cannon rounds.

Since being put into operation, Tiger proves it to be a reliable platform for operational duties overseas. In July 2009, three French Tiger HAP helicopters of the 5th Helicopter Regiment arrived at Kabul International Airport in Afghanistan, marking the first active deployment of the Tiger into an active combat zone. The helicopters performed armed reconnaissance and fire support missions, acting in support of coalition ground troops fighting a Taliban insurgency. 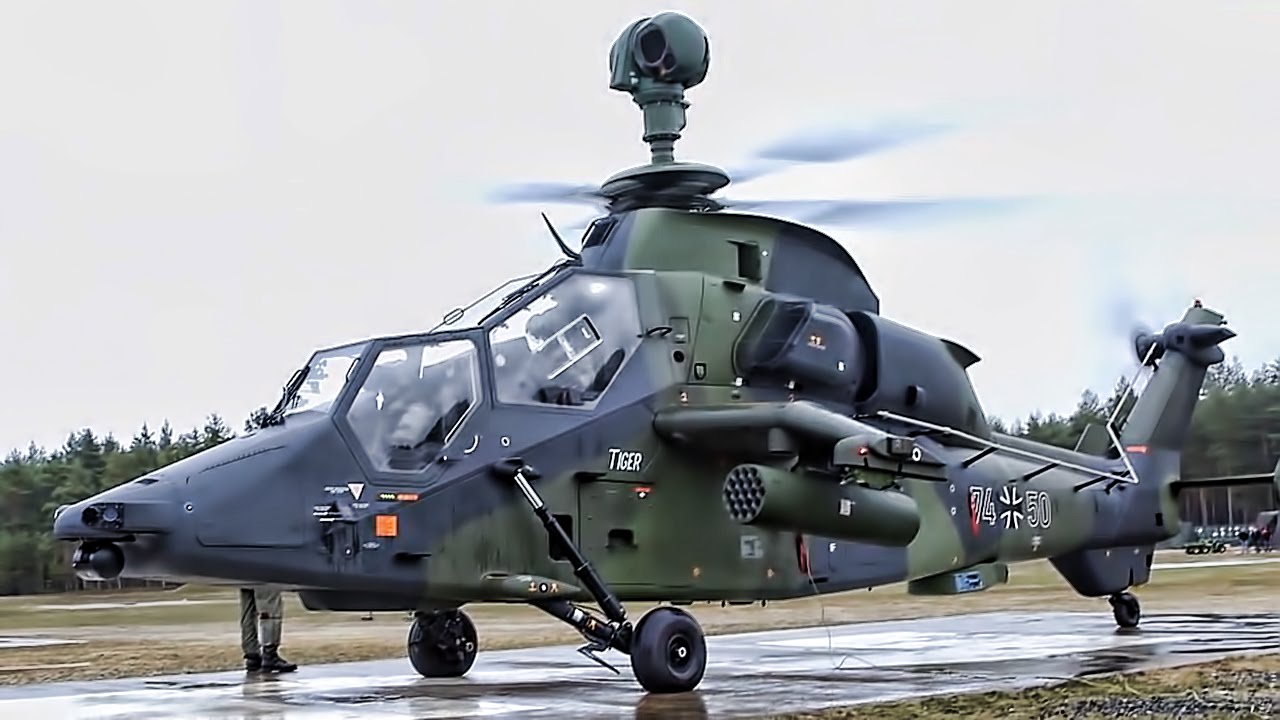