Angela Sutherland  – Icestech.info – “In Rodrigo Diaz’s lifetime there were in Spain and elsewhere many lords, commanders or bosses. In his day he was not unique but one of a type. Who were these bosses of the eleventh century?… However, if there were many ‘cids‘, there is only one national hero of Spain (and more particularly of Castile), El Cid – the crusading warrior who waged wars…” 1 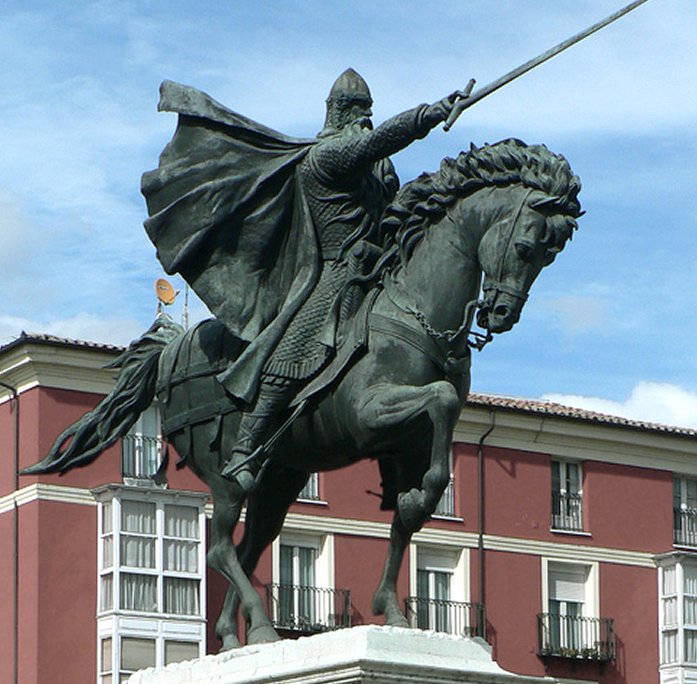 He didn’t come from a wealthy or powerful family. His real name was Rodrigo Diaz, Count of Bivar. Later, he came to be known as El Cid from the Spanish Arabic as-sid meaning ‘The Lord’. He was also known as El Campeador – ‘The Champion’ in Spain.

Born in 1040 in Burgos, Spain, El Cid was a medieval Castilian military leader during the 11th century, when the country was going through something of a political turmoil. His country consisted of several provinces and kingdoms, the most powerful of which was the Castillo.

Thanks to his courage and extraordinary military competence, the young Rodrigo established himself at the court of Ferdinand the Great. In good time, before King Ferdinand I died, his kingdom was divided among his five children, Sancho II was given Castile, and his brother became Alfonso VI of Leon.

The oldest of them, Sancho II of León and Castile, ascended the throne and made Rodrigo Diaz of Bivar the commander of the Castilian army. 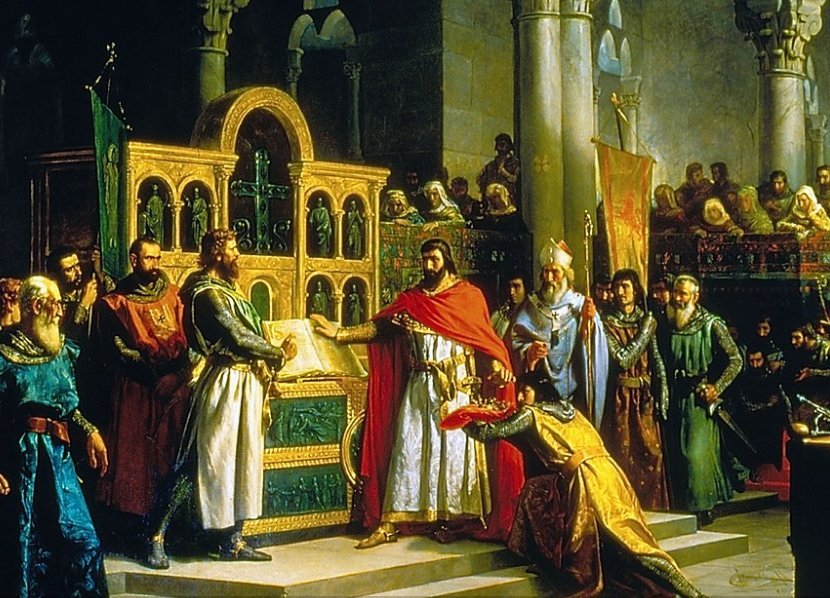 Marcos Giráldez de Acosta painting (1864) depicting the “Santa Gadea Oath.” In the middle of the scene, Alfonso VI (with red cape) is swearing with his right hand on the Bible that he did not take part in the murder of his brother Sancho II, while El Cid stands as a witness in front of him. Image credit: Marcos Hiráldez Acosta  – Public Domain

However, there was no harmony, mutual understanding, or loyalty among the three brothers, who immediately started arguing about who would get the royal power. Sancho, the oldest, wanted all the power for himself, so he was undoubtedly their strong opponent. He saw his brother Alfonso as his most significant threat, so he sent him into exile and settled with the Moors in Toledo, a Muslim stronghold. The Moors were Muslim inhabitants of the Maghreb, Iberian Peninsula, Sicily, and Malta during the Middle Ages.

Meanwhile, Rodrigo came to be educated by Prince Sancho. Rodrigo Diaz’s father was always loyal and had faithfully served old King Ferdinand, and Sancho had not forgotten the merits of the older man.

He took the young Rodrigo to court to give him the best possible education in all areas. In particular, Rodrigo was trained in the art of war and soon showed his bravery in the field as one of the foremost Knights of Spain.

His extraordinary skills were necessary because Sancho now had problems with the Muslims, who constantly threatened to penetrate the kingdom.  Rodrigo was, therefore, appointed commander-in-chief of the country’s troops. In a series of violent battles, he successfully drove the Muslims away from the country’s borders. He also helped Sancho to deal with his siblings.

The Prince made several unsuccessful half-thought-out attacks on the sibling’s castles. Eventually,  he emerged victorious from each siege because Rodrigo appeared in the final confrontation and commanded the troops in the decisive assault.

One night, on his way to meet one of his sisters, Sancho went to the city where she lived. He did not even reach the city’s gates when attacked outside the walls and cut down from behind. He died in Rodrigo’s arms. 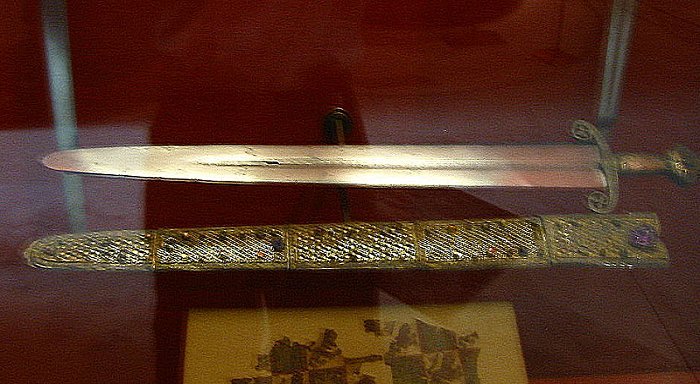 Now, El Cid stood without protection from any prince. Sancho’s brother Alfonso spilled no time to seize power and allowed himself to be crowned Alfonso IV, King of Castile.

Many wondered and even suspected Alfonso was involved in his brother Sancho’s death, but no one risked asking him. Also, El Cid wanted to know, so he confronted Alfonso in his palace.

This confrontation was necessary, and Alfonso knew it. At first, he was furious but then calmed down, swearing that he had not been involved in the death of his brother.

But was El Cid – the kingdom’s commander-in-chief – convinced?

Although El Cid continued to serve the sovereign, he lost his ranking in the new court.  He was treated suspiciously, and finally, in 1081, he was exiled.

Rodrigo Diaz now began life as a mercenary. In a way, his whole world of principles and ideals came into conflict. Now, he had to sell his services to the princes who wanted to pay his price. He was not on one side anymore; he served both Christians and Muslims. The rules changed, but El Cid was still brave and deeply respected for his fighting power as a Knight.

When he fought for Christianity against the Muslims, he was hailed in his native lands as a great Christian hero. Standing on the side of Muslims, they sang songs about him and wrote tribute poems. It was the Muslims who gave him the name “El Cid.” 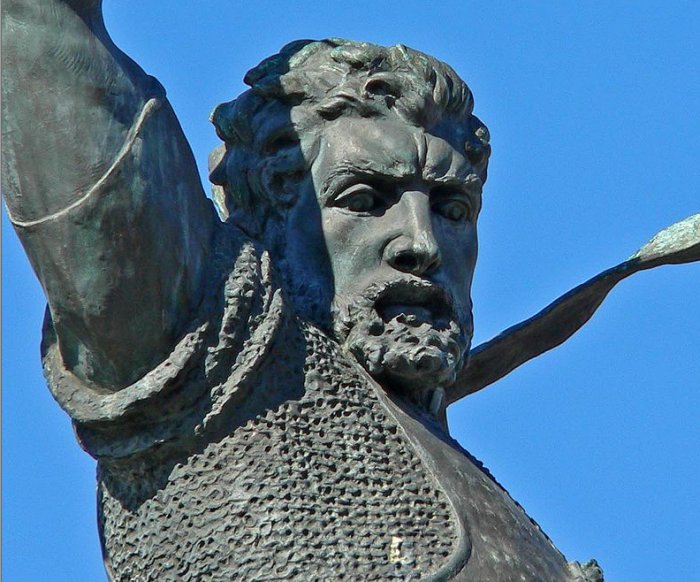 In the end, even Alfonso himself wanted to hire him for help against Yussuf, the Ruler of Morocco. Rodrigo was a mercenary, so he made no difference to those who paid.

“In 1086, a confederation of Berber tribes called the Almoravids invaded Spain from North Africa. Alfonso was crushed by them at Sagrajas on 23 October 1086 and recalled El Cid from exile. Their reconciliation was short-lived, and El Cid set about making himself master of Valencia.” 2

In 1092, he was told that the city of Valencia had fallen into the hands of the Moors, and he decided to drive them out and make himself Prince of Valencia. He seized the town on his behalf in 1094. Still, it was done in a brutal way, which showed general Rodrigo’s extraordinary military skills and, at the same time, how emotionless and bitter this man had become with time.

“In 1099, the city was attacked by a huge force of Almoravids. El Cid encouraged his men to fight without fear and won a magnificent victory, but his son Diego Rodríguez was killed in fighting at Toledo. After that, El Cid was no longer merciful with his Muslim prisoners. He ruled Valencia until his death there on 10 July 1099 at the age of 56.

His widow Jimena continued to rule, but in 1102 she was forced to abandon Valencia to the Almoravids when Alfonso VI withdrew his support.

The city was burnt, and El Cid’s body was taken back to Castile and reburied in the monastery of San Pedro de Cardeña near Burgos. Valencia remained in Muslim hands until 1238.” 2

El Cid never saw his family again, though he knew they lived an untroubled and happy life in Castile. His two daughters married each nobleman. Rodrigo, El Cid, lived the rest of his time as Prince of Valencia and died there in 1099.

The long epic “The Song of my Cid” (Poema del Cid) was written in the Middle Ages, and this literary work is the oldest preserved Castilian epic poem.