Angela Sutherland  – Icestech.info – Djoser was possibly the founder of the Third Dynasty of the Old Kingdom in Egypt. The Old Kingdom had begun with the third dynasty (2686 BC) and ended with the sixth, about 2333 BC). 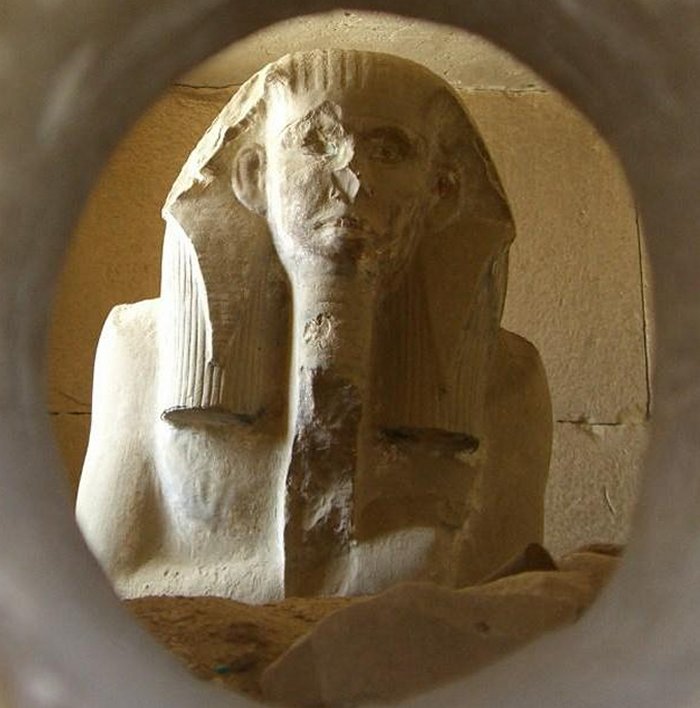 Djoser (also known as Zoser) was responsible for the world’s first known monumental stone building, the Step Pyramid at Saqqara, which was built during the Third Dynasty (c. 2686 BC–c. 2613 BC), and became his tomb.  Later other pyramids were built.

Little is known about Djoser ( also known as Netjerikhet), who succeeded to the throne when the country of Egypt experienced many political problems and instability. His ambitious goal was to overcome them.

It is believed that Djoser managed to extend and strengthen his rule and reach as far as Aswan, the First Cataract (later the official southern boundary of Egypt). During his reign, Egypt was politically stable, with a flourishing economy.

At the same time, however, it is also known that for seven years in a row, the Nile River had failed to rise high enough to irrigate the fields, which in consequence, his people experienced the devastation of crops and starvation. Djoser had to act quickly, so he consulted his chief advisor Imhotep about the source of the inundation, who, in turn, discovered that Hapi (Hapy), the early Egyptian god of the Nile and the spirit of the inundation lived in twin caverns located under the island of Elephantine. When it was time for the Nile to rise, the floodwaters were controlled by the ram god Khnum, who alone could unbolt the door of the caverns. When Djoser heard this, he made lavish offerings to Khnum.

That night in a dream, Khnum promised Djoser that he would release Hapi, and so it happened. The seven-year-long drought and associated famine subsequently ended with a plentiful harvest. 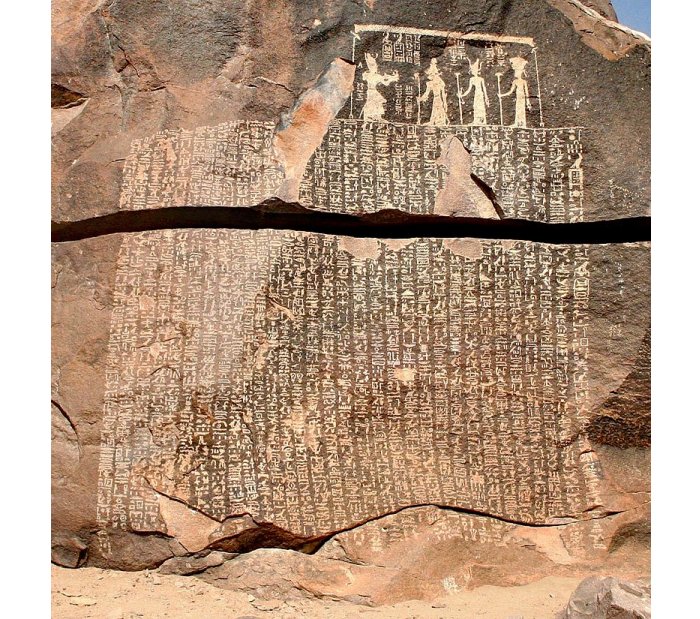 The Pharaoh Djoser is associated with a massive and innovative structure known as the Step Pyramid. Imhotep who primarily supported his building project, the Pharaoh’s genius designer, and his vizier, who decided to build a gigantic stone mastaba. Still, at some point, during construction, they made another mastaba on top of the first, and then yet another on top of the second. They continued this process until they had enlarged the structure into the world’s first pyramid. It was what we now call a “step pyramid,” made of limestone.

It consisted of six terraces some 200 feet (60 m) high, a base measuring approximately 125 x 109 meters, and only one close-fitting corridor leading to the close center of the monument and ending in a rough chamber where the entrance to the tomb shaft was once hidden.

Djoser (Zoser), whose name means as much as the ‘saint,’ was the son of queen Nimaathap and king Khasekhemwy (ca. 2690 BC), the last Pharaoh of the Second Dynasty of Egypt. However, very little is known about this great personality of ancient Egypt.

King Djoser’s name and titles appear between the ‘djed pillar and ‘tyet’ amulet, followed by Imhotep’s titles beginning ‘The Treasurer of the King of Lower Egypt,’ on this broken-off statue base. (Artifact is stored in Cairo Museum.)

He took the throne after the death of his elder brother. In the first period of the reign, the mother ruled as regent because of her son’s young age. He probably led initially from Abydos, but then from Memphis.

Historically, Djoser became the ruler of Upper and Lower Egypt, the first king of the third dynasty of the old state period, and reigned in 2690-2670 BC (or 2720-2700 BC). Some other sources, however, even propose the date 2686-2667 BC. Until the end of the history of ancient Egypt, he was considered a highly respected and profoundly honored ruler.

Many Treasures Robbed From The Step Pyramid

The pyramid – the tallest and massive building of the complex covering 40 acres (16 hectares) that included courtyards, shrines, the priests’ living quarters – was unfortunately not protected enough from looters. 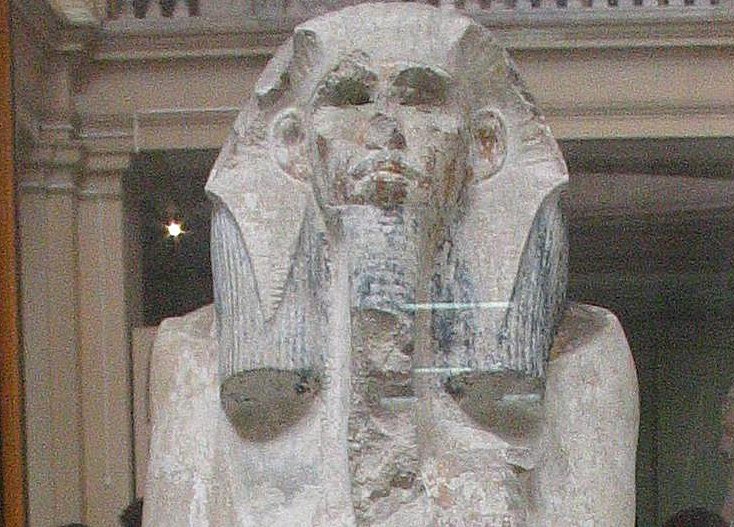 Statue of Djoser in Cairo Museum. This statue was originally in the serdab in the step pyramid complex. Egyptian Museum – Copyrighted free use

Still, excavations revealed plenty of stone vases that were found under the pyramid. In one of the passages, archaeologists discovered some Djoser’s remains and a mummified left foot probably belonging to the king. Among other discoveries, there is an alabaster coffin containing a young, perhaps eight-year-old child, accompanied by other deceased of the royal family. These valuable goods – decorated with still recognizable names of earlier Egyptian kings – still represent beautiful forms and high quality of artistry.

Other findings include two boundary stones in the king’s Heb Sed court, located within his pyramid complex. Djoser is also shown performing the Heb Sed in a false doorway inside his pyramid.

A box-like structure (in Arabic: serdab), made of Tura limestone, used in the wealthiest tombs, was discovered during the excavations of the pyramid. Within the serdab – with two small holes pierced through its front-facing slope – there was a life-size seated figure of Djoser. 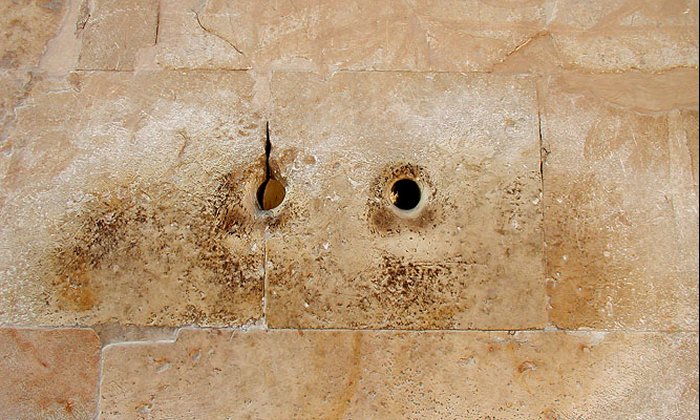 This sculpture is considered by archaeologists and other experts as the oldest sculpted royal figure from Egypt. The artwork depicts “the king closely wrapped in a long white cloak, probably used in the king’s jubilee or heb-sed festival. Food offerings and incense would have been placed on an altar before the two small eyeholes in the wall of the serdab, enabling the ka (the spirit of the king) to partake of the spirit substance – while, at the end of the day, the mortuary priests could enjoy the material substance of the offerings.” 1

The pyramid of Pharaoh Djoser and its surrounding funeral complex is today recognized worldwide as the first building built entirely of stone.  Perhaps the great Pharaoh Djoser is forgotten today. Still, his and Imhotep’s creation – considered the House of the Soul – created a deep, long-lasting impression for millennia.

After a reign of approximately nineteen years, Djoser died and was succeeded by Sekhemkhet around 2649 BC. Undoubtedly, it was minimal time to build such a massive structure as the Step Pyramid. Still, he managed to finish this project working with Imhotep, and it was well-functioning cooperation.