The U.S. Air Force is asking for funds in its budget request for the 2023 Fiscal Year to build and test a prototype self-propelled gun designed to shoot down incoming cruise missiles. The service has presented the weapon, which could use ammunition originally developed for the U.S. Navy’s abortive railgun program, primarily as a possible expeditionary base defense asset. However, it could have other applications, especially given renewed concerns about the threats that cruise missiles pose to military and other critical targets within the United States.

The Air Force’s proposed budget for the 2023 Fiscal Year asks for almost $89.1 million to support various “lifecycle prototyping” activities, including the construction of “a C-130 transportable/deployable Hypervelocity Ground Weapon System (HGWS) prototype.” It is unclear how much of that funding is expected to go to the HGWS effort specifically. 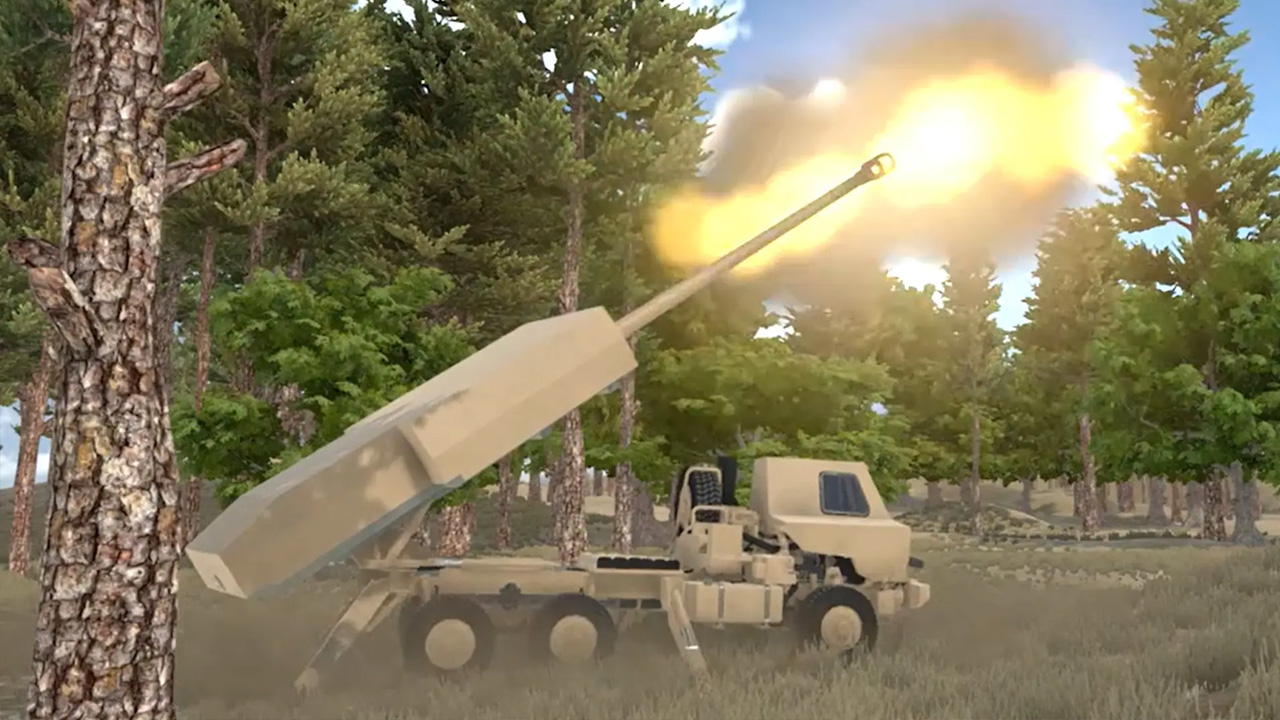 Work to “integrate the system into an existing joint service battle management system, and test its effectiveness against incoming cruise missiles as part of a life [sic; live] fire experiment” are part of the Fiscal Year 2023 goals for the HGWS project, according to recently released Air Force budget documents. “The HGWS prototype will rapidly deploy to a remote location to understand the effectiveness of expeditionary operations.”

The 2023 Fiscal Year budget proposal does not provide any additional specific details about what the Air Force’s requirements for the HGWS might be. However, the basic description of the weapon is virtually identical to a concept for a base defense system called the “Multi-Domain Artillery Cannon,” or MDAC, which the Air Force Research Laboratory (AFRL) unveiled at the Air and Space Forces Association’s annual Air, Space, and Cyber Conference last year. At the conference, AFRL had also shown the computer-generated video, seen below, depicting how the MDAC might be employed in an operational scenario.

The video only provides additional details about what the MDAC design might consist of beyond being a C-130-transportable large-caliber gun mounted on 6×6 wheeled chassis. Other extremely general capabilities like “high rate-of-fire” and “high muzzle velocity” are mentioned.

The notional vehicle design does have a configuration that is similar in broad strokes to various wheeled self-propelled 155mm howitzers that feature automated semi-automatic loading systems with relatively high rates of fire. Its basic form is particularly reminiscent in part of the Swedish Archer, which BAE Systems’ Bofors division says can be emplaced, fire four rounds, and then be on the move again all within 74 seconds.

With this in mind, it’s interesting to note that AFRL displayed a model of a hypervelocity projectile (HVP), which BAE Systems had originally developed for the Navy for use in electromagnetic railguns, as well as 5-inch naval guns and 155mm howitzers, at the 2021 Air and Space Forces Association conference as an example of what the MDAC would likely fire. The Navy all but canceled its railgun program and the associated HVP development work last year.

The idea that the Air Force is looking at some kind of mobile 155mm howitzer with an advanced auto-loader designed to fire HVPs to knock down cruise missiles would make a certain amount of sense. The service, in cooperation with the U.S. Army, demonstrated almost exactly this combination of capabilities during a larger test event in 2020. In that instance, a prototype of the Army’s XM1299 tracked self-propelled 155mm howitzer shot down a BQM-167 target drone standing in for a subsonic cruise missile using an HVP.

“Just for the record, [a] tank shooting down cruise missiles. That’s just awesome,” Will Roper, then the Assistant Secretary of the Air Force for Acquisition, Technology, and Logistics, said after that test, referring to the self-propelled howitzer’s successful intercept of the BQM-167. “That’s video games, sci-fi awesome. You’re not supposed to be able to shoot down a cruise missile with a tank. But, yes, you can, if the bullet is smart enough, and the bullet we use for that system is exceptionally smart.”

At least in principle, the HGWS/MDAC concept could offer significant advantages compared to more traditional cruise missile defense capabilities, such as surface-to-air missiles. HVPs would offer a lower cost-per-engagement compared to traditional surface-to-air missiles and, based on Archer’s 21-round magazine, it is likely that a single HGWS/MDAC vehicle could have more rounds at the ready than a typical ground-based missile launcher.

If target acquisition and cueing can be handled entirely by offboard sensors that the HGWS/MDAC vehicle is linked to via the unspecified “battle management system” network mentioned in the Air Force’s budget documents, this weapon could be relatively easy and quick to deploy and employ, even at austere locations. Networking capabilities being developed as part of the Air Force’s Advanced Battle Management System (ABMS) initiative help provide targeting information to the XM1299 prototype howitzer during the 2020 test. The service could also potentially leverage work the Army has done on its air and missile defense-focused Integrated Battle Command System (IBCS) network.

The HGSW/MDAC design could potentially help defend bases against a variety of existing and emerging threats beyond cruise missiles, including various tiers of unmanned platforms, as well.

All of these capabilities would be extremely important for supporting the kinds of expeditionary and distributed warfare concepts of operations that the Air Force, as well as other branches of the U.S. military, are crafting now specifically due to the threats that cruise and ballistic missiles pose to established bases. 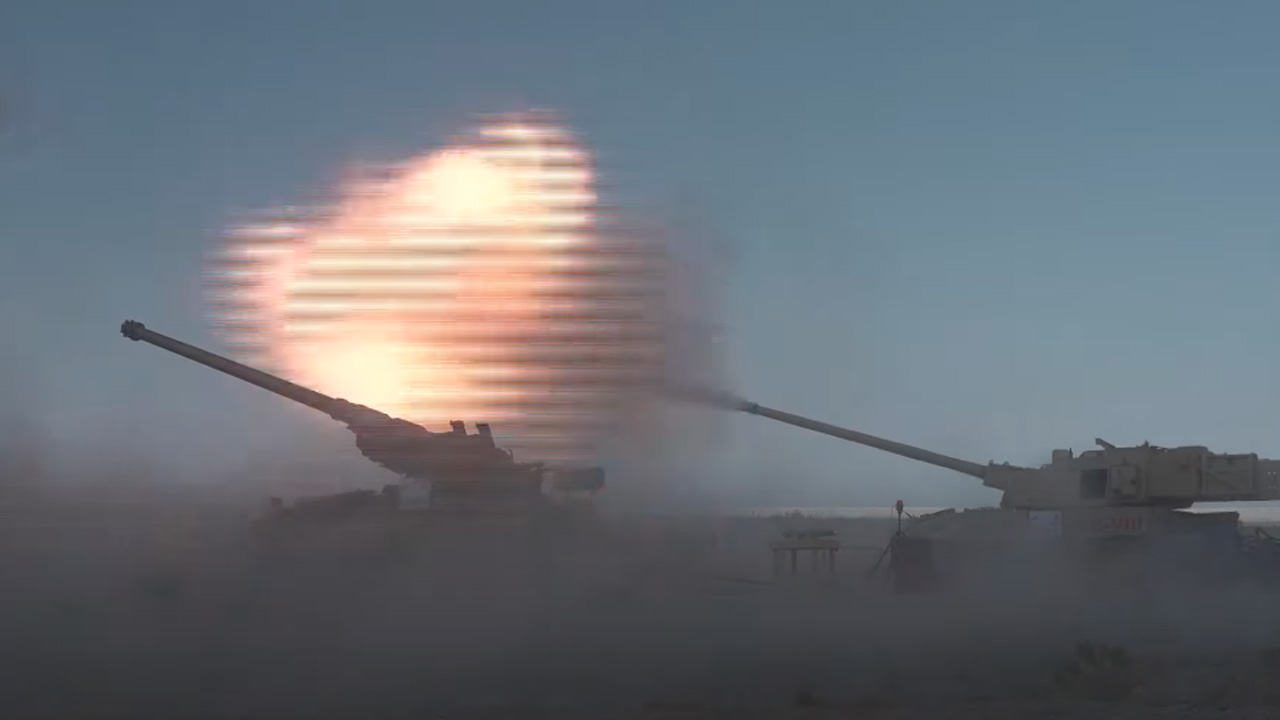 At the same time, distributed basing by itself is not enough to completely eliminate those threats and even remote and austere locations can be expected to need some degree of layered protection in future large-scale conflicts. HGSW/MADC would only be one component of those defenses and the Air Force is already known to be working in a variety of other different, but related veins, including new capabilities to outright deceive opponents.

“You want to confuse the enemy about where you actually are,” Secretary of the Air Force Frank Kendall said in an interview in March with Aviation Week’s Brian Everstine.” So some decoys in other locations will be helpful to do that.”

In another example of Air Force interest in future layered defenses, the service’s 2023 Fiscal Year budget proposal includes a mention of a “Base Defense Experiment – NASAM [sic] and HGWS.” NASAMS, which stands variously for Norwegian or National Advanced Surface to Air Missile System, is a surface-to-air missile system that includes ground-based launchers for the AIM-120 Advanced Medium-Range Air-to-Air Missile (AMRAAM).

In 2020, the Air Force and the Army conducted a test of NASAMS that demonstrated an expanded engagement envelope against a BQM-167 acting as a surrogate for a low-flying cruise missile. This surface-to-air missile system is currently in operational U.S. military service exclusively as part of the array of defenses around Washington, D.C., and the greater National Capital Region.

A potential test involving the pairing together of the future HGWS prototype and NASAMS highlights how the gun-based system could have applications beyond expeditionary base defense. In recent years, there has been significant renewed concern about cruise threats to the United States itself and then discussions about what would be necessary to protect sensitive military facilities and other critical infrastructure from such strikes.

A wishlist of things not currently in the 2023 Fiscal Year budget proposal from U.S. Northern Command (NORTHCOM) includes a call for more than $50 million in additional funding for a demonstration of some kind of domestic cruise missile defense architecture.

“What I want to let the industry, the Missile Defense Agency and the services do is let their minds run wild on capabilities to accomplish this mission,” Air Force Gen. Glen VanHerck, who is head of NORTHCOM and the U.S.-Canadian North American Aerospace Defense Command (NORAD), said at a Defense Writers Group event on Monday when asked about what capabilities might envision being part of this proposed test. He went on to say that he was interested in “non-kinetic” options, as well.

“There are multiple ways beyond the kinetic endgame defeat of this that we could potentially be successful in cruise missile defense,” he said. “And that could be through the use of the electromagnetic spectrum and other non-kinetic means to be able to do something beyond point defense in more of a wide-area defense or a limited-area defense.”

VanHerck further emphasized the importance of deterring an enemy strike to begin with as part of the larger cruise missile defense equation.

No matter what, the Air Force’s 2023 Fiscal Year budget request makes it clear that the service is interested in continuing to prove out the core HGWS/MDAC concept. More details about how it actually envisions employing such a weapon and how it could fit in a larger air and missile defense ecosystem in the future may now begin to emerge.

After this story was published, a reader alerted us to an additional section within the Pentagon’s overall 2023 Fiscal Year budget request related to the HGWS. The Office of the Secretary of Defense’s Strategic Capabilities Office (SCO) is seeking $151 million to support HGWS development as part of a larger portfolio of work on what are described as “Advanced Innovative Technologies.” It also notes that SCO received $3 million and $20 million in funding for HGWS research and development in Fiscal Years 2021 and 2022, respectively.

This line item says that the SCO’s goals for the HGWS program in the 2022 Fiscal Year were to “support Pre-Engineering & Manufacturing Development (EMD) activities for the radar, gun, fire direction, and projectile related to transition efforts,” though it does not say whether those objectives were met or not.

“The HGWS project will support initiation of the Engineering & Manufacturing Development (EMD) phase in preparation for transition efforts,” it says in describing the goals for the upcoming 2023 Fiscal Year.