Jan Bartek – Icestech.info – There is no lack of strange personalities in our history books. Some queens and kings were mad, but some were simply very eccentric.

Roman Emperor Heliogabalus was one of the most controversial rulers of all time. He did so many unusual things it’s difficult to say what made him famous, but it wasn’t his leadership. He lived only for 18 years and ruled for four years, but he accomplished countless immoral acts and scandals during this time. 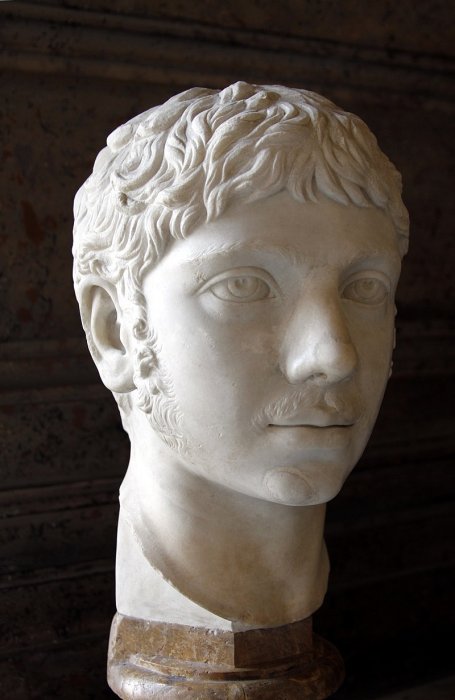 Some say rumors about Heliogabalus were not based on truth, and he was deliberately defamed. But there is no smoke without fire, and Heliogabalus must have given ancient historians at least some reasons to create a sexually distorted picture of his personality.

Who Was Emperor Heliogabalus?

Born in 204 A.D., Heliogabalus was the second son of Julia Soaemias and Sextus Varius Marcellus. When he was a young boy, he spent his time in Syria, serving the Syro-Roman sun god Elagabalus as a high priest at Emesa.

Considering his later religious controversies, one can assume the cult of god Elagabalus made an everlasting impact on the young man, who was only 14 years old when he became an emperor.  Heliogabalus had little respect for Roman religious traditions and replaced the traditional head of the Roman pantheon, Jupiter, with the deity Elagabalus.

It didn’t take long before the public and leading members of Rome’s government realized teenage Emperor Heliogabalus was not suitable for leading the mighty Roman empire.

The Immoral Acts Of Emperor Heliogabalus

Emperor Heliogabalus was eccentric, to say the least. He hated wearing Roman and Greek clothes because they were made of cheap wool. The greatest problem, however, was his desire to be a woman. Emperor Heliogabalus was allegedly married to five times with women, but he was transgender and one of the first historical persons to seek sex reassignment surgery. He had male lovers and loved to dress as a woman. He wore golden necklaces and makeup and married an ex-slave who he called “my husband.”

According to Cassius Dio, a Roman statesman and historian of Greek and Roman origin Emperor Heliogabalus “used his body both for doing and allowing many strange things … He would go to the taverns by night, wearing a wig, and there ply the trade of a female huckster. He frequented the notorious brothels, drove out the prostitutes and played the prostitute himself. Finally, he set aside a room in the palace and there committed his indecencies, always standing nude at the door of the room as the harlots do, and shaking the curtain which hung with gold rings, while in a soft and melting voice he solicited the passers-by.”

Emperor Heliogabalus has suffered one of the worst reputations among Roman emperors. He might have got away with his bizarre lifestyle, but his rape of a vesta virgin caused public outrage. Heliogabalus became convinced he was “the embodiment of his sun god and decided therefore that it was about time he married a goddess.

He settled on Tanit, the Carthaginian moon goddess. Each deity had a large stone that was the focus of worship and while Elagabalus’ stone was brought from Syria, the Tanit stone was being transported from Africa. The young emperor not only presided over this bizarre union of two inanimate objects, he also ordered his subjects to celebrate the ‘marriage’ and had the effrontery to demand a large sum of money for his dowry.

As his grandmother had anticipated, because of his youth and ethereal nature, Elagabalus was happy to leave the boring duties of government to her. Soon after he arrived in Rome, she sought to confirm his status by marrying him to Julia Cornelia Paula, a member of a highly influential family, but they divorced after barely a year, with Elagabalus claiming that his bride was ‘bodily unsuitable’ to be an emperor’s wife.

His second marriage was all his own work. In ,220 he broke into the secret sanctuary of the goddess Vesta and raped Aquilia Severa, one of the chaste vestal virgins. Under Roman law, any vestal who had sexual intercourse was to be buried alive, but Elagabalus elected to marry her in the hope that they could produce ‘god-like children’. However, many Romans were greatly offended by his action and considered it sacrilege.” 1

Emperor Heliogabalus loved everything beautiful, especially flowers. “He used to strew roses and all manner of flowers, such as lilies, violets, hyacinths, and narcissus, over his banqueting-rooms, his couches, and his porticoes, and then stroll about in them. He would refuse to swim in a pool that was not perfumed with saffron or some other well-known essence.” 2 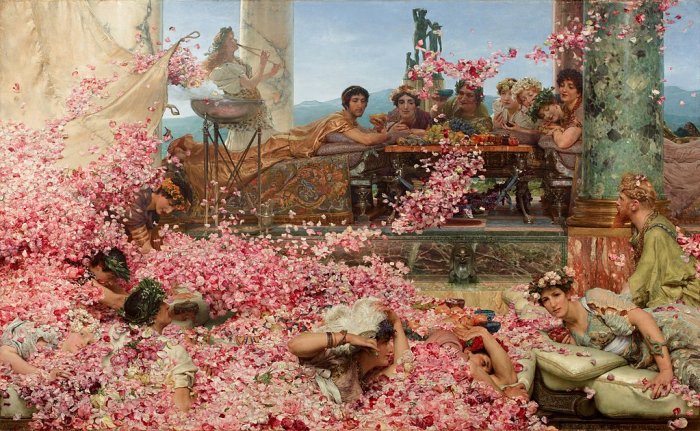 The Roses of Heliogabalus by Alma-Tadema (1888). Credit: Public Domain

The famous painting The Roses of Heliogabalus by Sir Lawrence Alma-Tadema depicts guests of Emperor Heliogabalus being suffocated by a shower of rose petals for the emperor’s entertainment. According to the original story, violets were the flowers of death. Roses have long been a symbol of sensual beauty, corruption, and death which is most likely why Tadema picked them for his marvelous painting.

Unlike many Roman emperors, Heliogabalus was not a tyrant, but he was a young man who history remembers as a person enjoying an unspeakably disgusting life. As a result, he was completely unsuited for leading the Roman Empire. A plot devised by his grandmother led to his assassination carried out by the members of the Praetorian Guard who were annoyed with his love relationship with Hierocles, a blond slave he called his husband.

His mother tried to protect him, but she was also murdered.

“He made an attempt to flee, and would have got away somewhere by being placed in a chest had he not been discovered and slain, at the age of eighteen. His mother, who embraced him and clung tightly to him, perished with him; their heads were cut off and their bodies, after being stripped naked, were first dragged all over the city, and then the mother’s body was cast aside somewhere or other, while his was thrown into the Tiber.”3

Following his assassination, many followers and friends of Heliogabalus were killed or deposed, including his lover Hierocles. Women were once again prohibited from attending meetings of the Senate, and his religious edicts were reversed, and the stone of Elagabal was transported back to Emesa.

The glory days of the transgender Roman Emperor Heliogabalus ended.