Picture people 5,650 years ago gorging on huge amounts of beef, smashing large decorated bowls that may have held broth or other liquids and possibly smashing human skulls. They apparently did all this at a newly discovered ritual center near Stonehenge, built about 1,000 years before the stone circle was constructed.

Archaeologists found human skull fragments from one person among the detritus in the 950-meter (1,038-yard) concentric circle that makes up the outer ring of the segmented ditches of the complex. They believe there are probably other skull fragments among the objects in the circles.

These prehistoric circular ditches, called “causewayed enclosures” because they are crossed by causeways, are common in England, where there are the remains of about 70. They are also found in Europe, including in Germany and Denmark.

Most Secret Bases- Governments DON’T Want you Knowing About

The Independent article infers archaeologists are mystified by the purpose of the circular enclosures: “Their precise original function remains a mystery, but the scant available evidence suggests that they were used for a mixture of ceremonial, religious, political and mortuary roles.”

This latest find near Stonehenge is at Larkhill in Wiltshire, which is an area of military installations. The find seems to confirm what has been apparent for some time: The area around Stonehenge held special attraction for prehistoric humans for millennia.

As Ancient Origins reported in July 2016, about 5,000 years ago, not far from Stonehenge on Salisbury Plain in England, some people built a stone circle smaller than its more famous counterpart. But for some reason, sometime after they built it, they dismantled the circle of bluestones and removed them.

Stonehenge and “Bluestonehenge,” as researchers have dubbed it, and other manmade features within a mile or two of the famous site were newcomers among some very ancient human-worked features in the landscape, a group of researchers says.

Features of the immediate landscape of Stonehenge include three stone circles, at Stonehenge itself, at the Neolithic village of Durrington Walls, which are still standing, and another that was taken down—Bluestonehenge. (Drawn by Joshua Pollard for Antiquity)

The archaeologists published an article in July about Bluestonehenge in the journal Antiquity (closed access) that says it and Stonehenge, a third stone circle several hundred meters away known as Amesbury henge and another at Durrington Walls came much later than when Stone Age hunter-gatherers began building features in wood in the area.

About 9,000 years ago, some people built wooden features that may have been ceremonial or ritual in nature—possibly aligned to solstice sunsets.

Chemical traces of the pinewood are still detectable in the postholes in the soil near Stonehenge.

Also, along the River Avon researchers have found activity from the 8 th millennium BC through the 5 th millennium BC, “making it, potentially, an unusually ‘persistent place’ within the early Holocene,” the authors wrote in Antiquity. The Holocene was the most recent Ice Age that began around 10,000 years ago.

“Stonehenge has long been known to form part of a larger prehistoric landscape,” wrote archaeologist Michael J. Allen and his colleagues in Antiquity. “In particular, it is part of a composite monument that includes the Stonehenge Avenue and the newly discovered West Amesbury henge, which is situated at the eastern end of the Avenue beside the River Avon.” 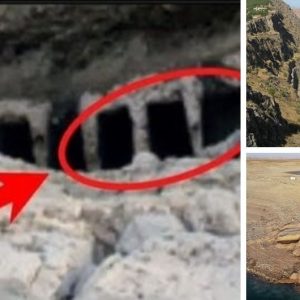 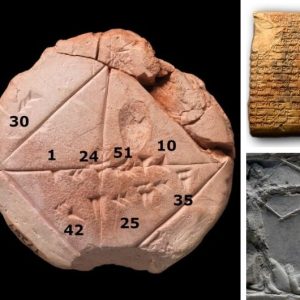 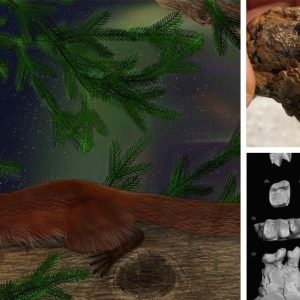 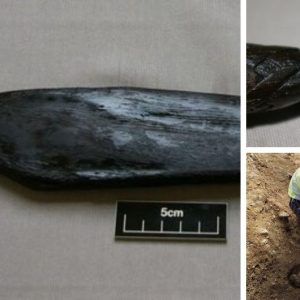