he U.S. Army has chosen the BAE Systems BvS10 Beowulf tracked vehicle as its new Cold Weather All-Terrain Vehicle, or CATV. The CATVs will help transport troops and equipment across the harsh, but increasingly strategic Arctic where its current stable of wheeled combat vehicles have struggled to operate in the extreme cold.

Late on August 22, BAE was announced as the winner of a $278 million contract to build four CATVs, the first batch of what could ultimately be a 110-vehicle fleet spread across Army and National Guard units operating in the far north. Deliveries to the Northern Warfare Training Center at Fort Wainwright, Alaska, are scheduled to begin in mid-2023.

Beowulf can carry up to 14 soldiers. BAE Systems
The CATV contract is BAE’s first sale of Beowulf, built in Hägglunds, Sweden, and based on the BvS10 armored variant that is currently in service with several European nations. They will replace the Army’s aging Cold War-era Small Unit Support Vehicles, or SUSVs, also built by BAE Systems Hägglunds, and known internationally as the BV206. Beowulf’s engine, transmission, and hydraulic system are supplied by U.S.-based manufacturers.

A US Army Small Unit Support Vehicles (SUSV). US Army
Beowulf is an articulated, unarmored, tracked vehicle comprised of two distinct sections: a cab and a modular, reconfigurable trailer. It is designed to carry personnel and a variety of payloads for a variety of missions. It can traverse snow, ice, rock, sand, mud, and swamp conditions, and can operate in steep mountain environments.

It is also fully amphibious for fording rivers or flooded areas and operating in shallow coastal waters. Its large windows and spacious, heated compartments are ideal for utility work in difficult terrain, where warmth is critical to reducing occupant fatigue and maintaining morale.

Beowulf’s articulated mobility system provides maneuverability across varying terrain surfaces. It has a top speed of over 40 miles per hour, a range of at least 250 miles, and can carry up to 14 troops. Its modular design can be reconfigured for multiple missions, such as logistical support, disaster, and humanitarian relief, search and rescue (SAR), and other missions as required, according to BAE. Like its predecessor, Beowulf can be slung under a CH-47 helicopter. UH-60s would carry it in two halves with troops reassembling it after it arrives at the destination, which the Army already trains to do with its existing SUSVs.

Beowulf during testing. (BAE Systems)
Beowulf beat out a team of Oshkosh Defense and ST Engineering that offered the latter’s Bronco 3 articulated troop carrier for CATV. Both vehicles were evaluated for mobility, payload, and swim capabilities in extreme cold-weather conditions in Alaska from August 2021 to January of this year. Testing included amphibious operations, navigating terrain with varying levels of complexity, starting and operating in freezing weather, and a user assessment by soldiers.

“We look forward to the CATV fielding and the increased capabilities it will bring to America’s Arctic Airborne Division,” said Maj. Gen. Brian S. Eifler, commanding general of the 11th Airborne Division and deputy commander of U.S. Alaskan Command based at Joint Base Elmendorf-Richardson, Alaska. “The small unit support vehicles were great in their day, but have needed replacing for the past two decades. These new vehicles will provide our Arctic Angels with capable, reliable mobility and increase their survivability in the harshest conditions Alaska and the Arctic has to offer.”

Beowulf consists of two tracked sections: one with a cab and one solely for the transportation of troops and equipment. BAE Systems
Lt. Col. Seth Langston, chief of the Maneuver Requirements Division’s Mobility and Lethality Branch at Fort Benning, Georgia, said Beowulf would fill “long-known capability gaps” the Army faces when operating in the Arctic.

“This enhanced capability will increase the Army’s ability to operate in extremely cold weather, mountainous and high-latitude environments and supports the Army and DoD Arctic Strategies,” Langston said.

Reviving the historic airborne unit designation was aimed at differentiating the needs and mission sets of the infantry units stationed in Alaska and focused on Arctic operations. As such, its soldiers need reliable overland mobility in harsh, frozen terrain. Existing vehicles available to the unit, like the Stryker wheeled armored combat vehicle are unreliable in frozen and varying conditions soldiers are likely to encounter above the Arctic Circle.

Chief of Staff of the Army Gen. James McConville said that the Stryker Brigade Combat Team b ased at Fort Wainwright would transition to become a more mobile, infantry-based unit focusing on air assault capabilities and equipped to maneuver specifically in cold, northern latitudes. That plan involves moving the unit’s Strykers out of Alaska by fall to make way for new CATVs.

Strykers are so ill-suited for Arctic conditions that soldiers had little faith in their effectiveness and spent far more time repairing the wheeled vehicles than operating them in the field. The Strykers often freeze up in the extreme cold. Soldiers became so frustrated with the Stryker’s performance in Alaska that their replacement was seen as at least a partial salve to morale that had dipped very low. You can read more about the Stryker’s cold climate woes in this piece by Haley Britzky over at Task & Purpose.

Beowulf’s ability to be sling loaded under a helicopter fits in with the unit’s focus on air assault. The legacy SUSV, a variant of the Hagglunds Bv 206, was air-droppable. The modernized Bv 206S variant, which has never been in U.S. military service, was even low-profile enough to be carried inside a CH-47-series helicopter.

It is unclear whether Beowulf is as transportable as the SUSV or the Bv 206S, but that would align with both the air assault and airborne mission sets the 11th Airborne shoulders. Long-range mobility is critical in the Arctic, where cold can wear down troops and equipment and military support infrastructure is scarce and very widespread. 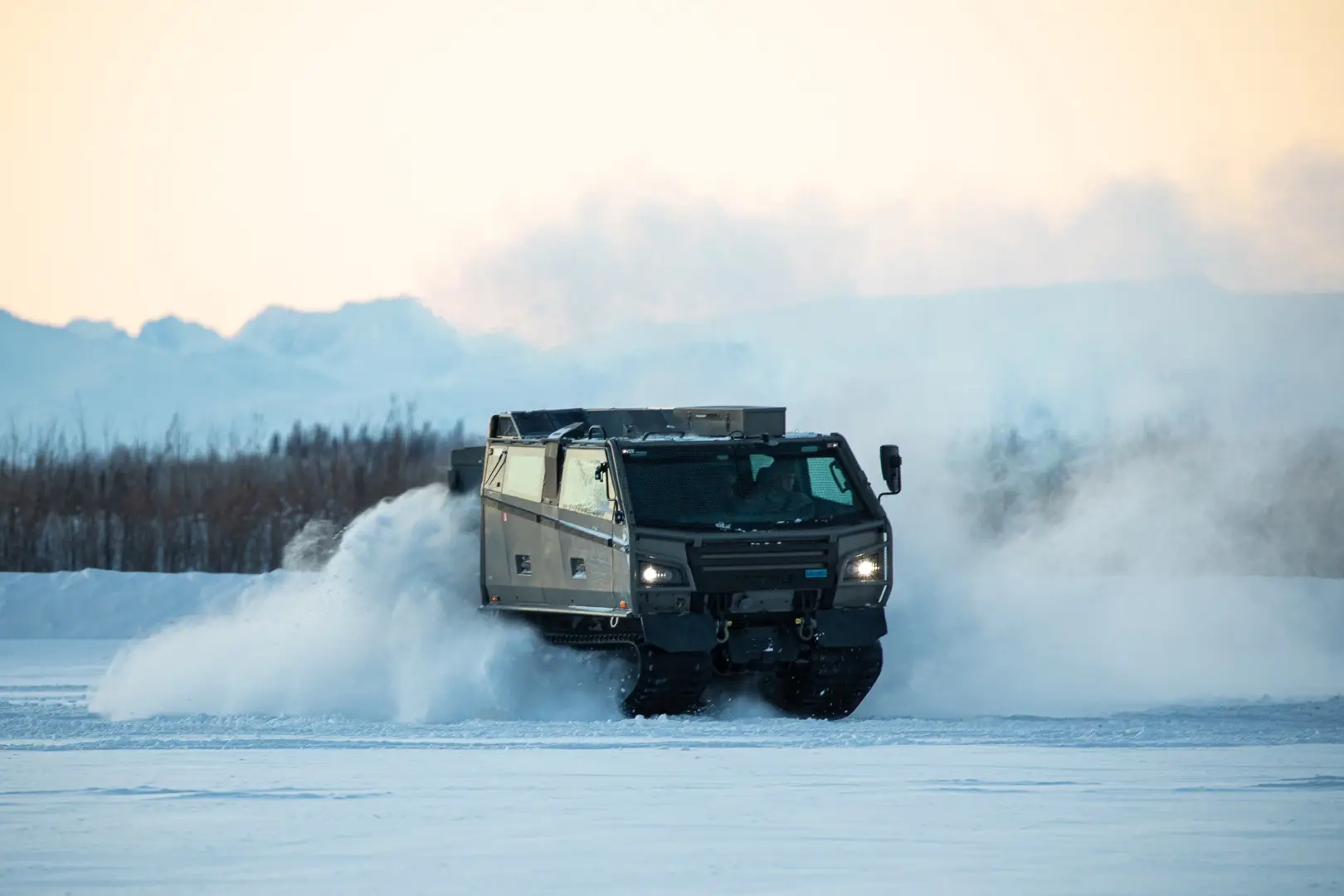 Beowulf takes on a snow drift. BAE Systems
For the National Guard, the vehicle’s amphibious snow-capable and air-transportable qualities make it useful for disaster relief just about anywhere. They could be flown in by helicopter to areas devastated by blizzards, floods, hurricanes or other natural disasters, for instance.

The potential to add heavy weapons like mortars or even missiles to the CATV’s towed section — SUSVs are capable of acting as tow tractors and Hagglunds carriers have been shown in the past as missile and mortar carriers — adds yet another dimension to the capability such a vehicle can bring to the high north.

Climate change brings both warming water and strategic opportunities to the historically ice-clogged Arctic. Russia especially has asserted dominion over a portion of the natural resources beneath the seabed in the region. International competition has also ramped up for control of newly opened maritime trade routes that will run through the far northern latitudes.

The U.S. military is intent on growing its presence in the region to counter Russian expansion. The Army’s commitment to troop mobility with a new CATV designed specifically for use in frigid climates underscores the service’s desire to play a major role in the region as well.